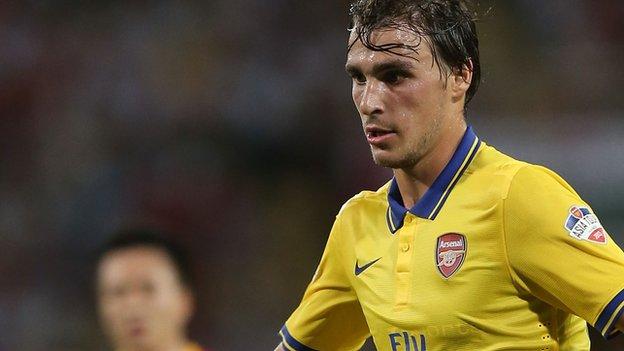 Miquel, 20, who has Champions League experience with the Gunners, has made 14 appearances for the Premier League club since 2011.

Foxes boss Nigel Pearson told BBC Radio Leicester: "He will give us a different type of option at the back."

His availability against Leeds on Sunday is subject to Football League and Football Association clearance.

Miquel featured three times for Arsene Wenger's men last season, and scored his first senior goal for the Gunners in the 6-1 win over Coventry in the Capital One Cup.

The former Barcelona trainee said he will fight to make a place in the heart of the Foxes defence his own.

"I came here knowing it would be a challenge for me," Miquel said.

"I need to play, and I think here will give me a chance to be part of the squad, to be fighting for a place in the starting XI. It is good to have competition.

"I know I will get a chance, I just have to take it when I have it."

Miquel is only the second player to move to the King Power Stadium this summer, following the arrival of former Tranmere Rovers left-back Zoumana Bakayogo.