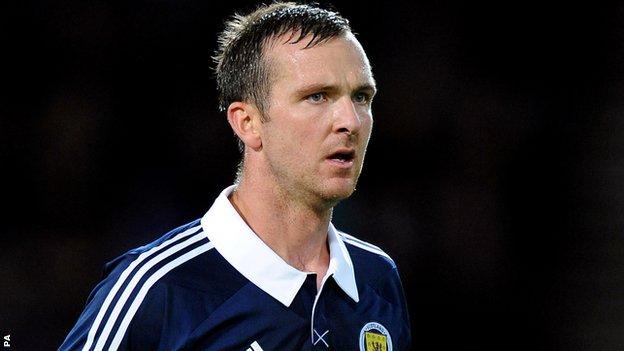 Coventry City have signed Scotland defender Andy Webster on a two-year contract, despite still being under a transfer embargo.

The Sky Blues, who are in administration, have been given special dispensation by the Football League to sign the 31-year-old.

Webster has followed Mathieu Manset in joining the club via this method.

"We're delighted to bring a player of Andy's quality to the club," boss Steven Pressley told the club website.

Webster, who has 28 caps for his national side, left financially-stricken Hearts this summer, where he played alongside Pressley for five seasons.

Webster also had spells at Rangers, Dundee United, Wigan and Bristol City, who Coventry face in their first game at Northampton's Sixfields stadium on Sunday.

"I played for a number of seasons alongside him so I'm very much aware of his footballing qualities and his character," Pressley added.

"I believe Andy will bring strength, leadership and aggression to our squad and will also be a vital stabilising influence on our young group of players."

The Sky Blues began the season with -10 points after one of the club's subsidiary companies was left facing liquidation following the rejection of a Company Voluntary Agreement on Friday.

The Football League allowed them to start the campaign, but they have lost their opening two matches.