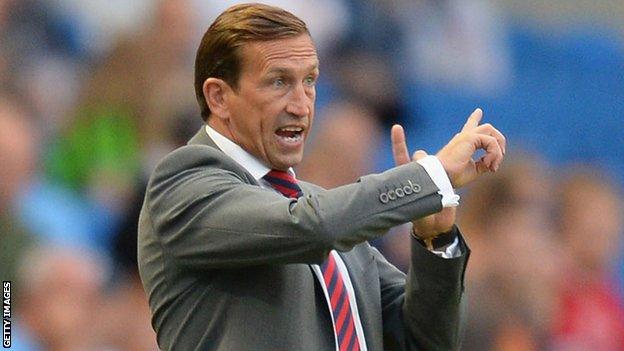 Newport County manager Justin Edinburgh expects his team's trip to Northampton to provide a benchmark for the rest of the season.

County made a dream start to their first Football League campaign in 25 years with a 4-1 win over Accrington.

They followed that up with a 3-1 Capital One Cup win at Championship Brighton, but Edinburgh thinks the Cobblers will be a real test.

"It's going to be a benchmark for what we're trying to achieve," he said.

"They're a strong team in this division, very unlucky not to go up through the play-offs last year.

"[They are] managed by a very experienced manager. Against Northampton it'll be interesting to see where we're at on Saturday."

The Welsh club are back in the Football League for the first time since being relegated into the Football Conference in 1988.

Newport County went out of business in 1989 and a new club, Newport County AFC was formed and fought its way through the non-League ranks before finally gaining promotion through the Conference play-off final in May 2013.

Former Tottenham defender Edinburgh is not getting carried away by his team's winning start.

"As much as it's early and it's only going to be our second league game, it's going to be a tough encounter there at Sixfields," he added.

Newport will be without defender Byron Anthony, who suffered a broken ankle against Brighton.

And the fact the win over the Seagulls came after extra-time is another issue for Edinburgh, with player fatigue a potential issue.

However, he says he will pick his strongest team irrespective of the exertions against Brighton.