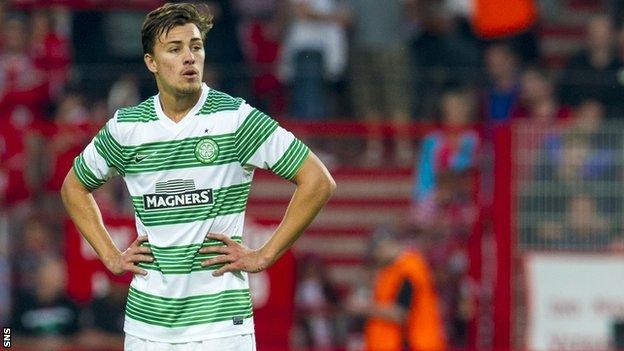 Kilmarnock boss Allan Johnston is keen to sign Celtic's Jackson Irvine but does not expect any new captures in time for the visit of St Johnstone.

"We are still trying to get people in but I don't think we will have anyone in place for the weekend," Johnston said ahead of Sunday's match.

"Jackson Irvine is definitely one we are interested in but nothing has been sorted out yet.

"It won't be done by Sunday, I think he is playing with Celtic in Dublin."

Celtic are playing a friendly against Liverpool in Dublin the day before Killie host Saints, who were knocked out of the Europa League qualifiers by Minsk on Thursday.

"I am sure they will be desperate to make up for that, I don't think it will affect them too much," said Johnston of the Perth side.

"Obviously the game went to extra-time as well so we will need to make sure we play at a high tempo.

"The half-hour extra can take it out of a player plus, it was a midweek game but I am sure the manager will have them fired up and make sure there is a reaction.

"I have seen them three times this season and they have done unbelievably well.

"They are solid, they don't lose goals, they are aggressive in the middle of the park with good experience.

"And look at their front players, they have goals all over the pitch."

Kilmarnock opened their Scottish Premiership campaign with a 2-1 defeat by Aberdeen and Johnston is anxious to gain his first three points as manager of the Ayrshire side.

"We didn't have a great record at home last year so it would be good to start with a win this season," he added.

"We didn't deserve to win the game at Aberdeen so we need to improve as a team.

"We have really good front players in Kris Boyd and Paul Heffernan and we need to create chances for them."