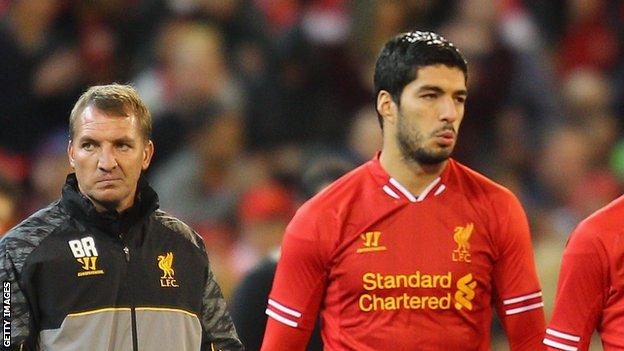 Liverpool boss Brendan Rodgers believes striker Luis Suarez will come to accept that he will not be sold.

Suarez, 26, has been told to train alone after seeking a move away from Anfield throughout the summer.

Arsenal have had two bids rejected for the Uruguayan, with Liverpool owner John W Henry saying it would be "ludicrous" to sell to their rivals.

"There will come a point where he'll recognise the club is not going to sell," Rodgers said.

Suarez has agitated for a switch since the end of last season, admitting in May that it would be "difficult to say no" to a move to Real Madrid when speaking to a Uruguayan radio station.

The only official interest in him thus far has come from Arsenal, however, with their latest offer of a pound over £40m being turned down.

That deal had been expected to trigger a release clause in the contract by the player, with Suarez going on to tell the Guardian and Daily Telegraph he had been promised he could leave Liverpool this summer if they did not qualify for the Champions League.

Both Rodgers and Henry have dismissed that assertion.

Speaking ahead of a friendly against Celtic in Dublin on Saturday, the Liverpool manager again reiterated his club's position that there is "no inclination to sell".

"We're quite calm," Rodgers said. "The club is in control of the situation.

"We've got no inclination to sell and we've been strong on that."

Suarez has excelled since arriving at Anfield in January 2011 from Ajax for £22.7m, scoring 51 goals in 96 appearances.

Despite the furore surrounding him, Rodgers was convinced Suarez would continue his excellent form for Liverpool if forced to stay.

"He's a world-class striker. I've got no question that when he's back he'll have a similar impact," the 40-year-old said.

Rodgers also stated Suarez would return to training with his team-mates once his approach improved.

"It's been a difficult period for him but it's my job to protect the group," he said. "Once he's back with the spirit he'll rejoin the group."

Arsenal manager Arsene Wenger has reacted to Liverpool's vow that they will not let Suarez leave by stating he will continue his pursuit of the player in "a respectful and amicable way".

"There is nothing to add to what I said already about the transfer of Suarez," he said. "If it will be done, it will be done in a respectful and amicable way with Liverpool.

"I didn't read [Henry's] statements but we'll be faithful to the way we want to behave.