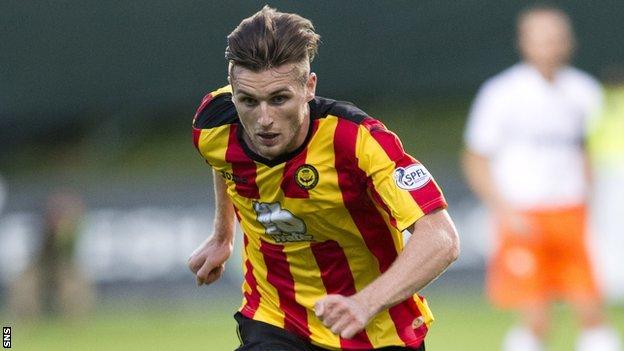 Stephen O'Donnell insists Partick Thistle are not getting "caught up" in Hearts' position as the Jags seek to establish themselves in the top flight.

Hearts began the season with a 15-point deduction after entering administration and lost their opening league game against St johnstone last week.

Thistle, who have been promoted to the top flight, already have a point on the board after drawing with Dundee United.

"We want to look above us and not behind us," said defender O'Donnell.

If we can emulate Ross County then it would be brilliant

"We should look at it as one point gained just now and keep pushing.

"If we keep playing like we did against United, I'm sure we won't be worried about the bottom but we will have to wait and see.

"I think we all did ourselves proud last Friday night. It was a good game and if we keep playing like that then I wouldn't think there was anything to fear.

"I have played one game in the Premiership so I can't really be claiming that we are going to be excellent, I don't know.

"If we stay up the Thistle fans will be delighted."

Thistle travel to face Ross County on Saturday, pitching the last two champions of Scotland's second against each other.

"It gives you hope that the gap [between the top two divisions] can be bridged.

"I think a lot of that was to do with their home form, it was great, and if we can emulate that then it would be brilliant."