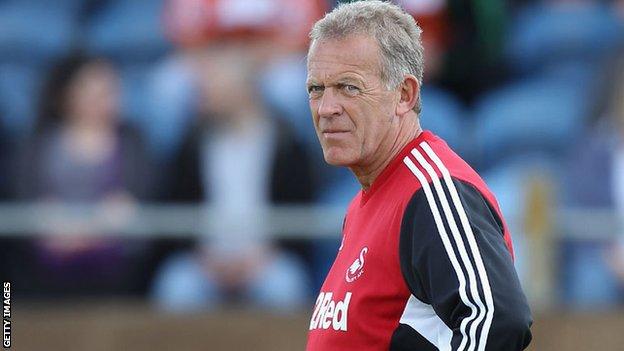 The game at the Liberty Stadium on 17 August will be David Moyes' first league match in charge of United since taking over from Sir Alex Ferguson.

Curtis predicts Moyes will be a worthy successor to Ferguson, but thinks his team might be vulnerable early on.

"It really is a good time to play them," he said.

Michael Laudrup's team have enjoyed a successful pre-season build-up, and have qualified for the play-off round of the Europa League thanks to a 4-0 aggregate win over Malmo.

Champions United, however, have seen a bid to buy Cesc Fabregas rebuffed by Barcelona while star player Wayne Rooney has been linked with a move away from Old Trafford, despite the club insisting he is not for sale.

Curtis, who played 364 games for Swansea between 1972 and 1990, believes those are factors which might have disrupted United's preparations for the new season.

"There's the Wayne Rooney issue and I think the results looking at them have been a little bit sketchy over pre-season," said Curtis, 59.

"And I'm sure they would have liked to have strengthened the squad, but for whatever reason he has not been able to bring in the type of players he [Moyes] wanted.

"Anyone who was going to follow Sir Alex Ferguson was always going to find it difficult.

"But I'm sure he [Moyes] will adapt to the role and be a big success, they've got a fantastic set-up and great players

"We've got loads of confidence. Pre-season has gone well, we're not really conceding many goals and we played really well in our first game against Malmo in our first competitive game.

"Morale and confidence is as sky-high as it possibly can be going into a game against the champions."

Swansea will be starting their third season in the top flight after achieving promotion from the Championship in 2011.

Their ninth-place finish last season was their best since John Toshack's team finished sixth in the old First Division in 1982.

Curtis played in that side under Toshack, and will be happy to see the club mark another little piece of history against United.

"We played them in the last game at Old Trafford with Sir Alex Ferguson in charge, and then to play them again in David Moyes' first [league] game might possibly not be a bad thing," he added.

Listen to the full interview with Alan Curtis on the Back Page on Radio Wales, 08:30 BST Saturday, 10 August.