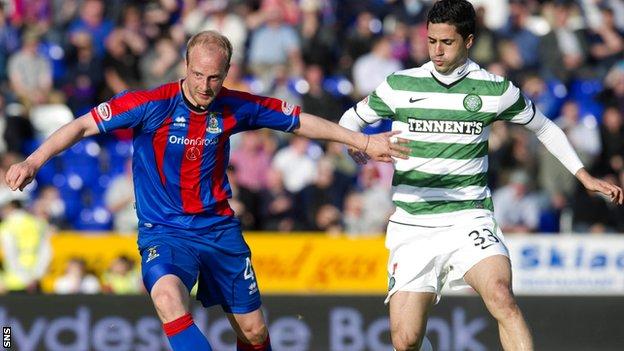 Celtic travel to central Eurasia on 20 August for the first leg, and Duff, who plays in Kazakhstan, says Shakhter will provide stiff opposition.

"Celtic, on paper, are favourites to go through, and I would expect them to do well," said Duff.

"I have split loyalties with my team-mates, but I think Celtic will do it."

Duff, who moved to Kairat last year following spells with Dundee United, Aberdeen and Inverness, warned Celtic against complacency and described Karagandy as a strong side who tend to play the long-ball game.

"They're a very physical team - their back four are six foot up to six foot six," said Duff.

"Midfield are exactly the same and up front they tend to put a lot of high balls in.

"They're a very physical team and Celtic will probably under-estimate them a little bit - they tend to throw the ball in from the halfway line and they used that last year to their benefit. That's how they scored 90 percent of their goals."

The tie will be the first time Celtic have played against Kazakh opposition and the match will be played in the Astana Arena in the country's capital city, due to the club's own stadium not meeting Uefa standards.

Duff believes Celtic will have to contend with warm weather and the synthetic Astana pitch in the first leg to have any advantage for the home leg in Glasgow.

"The main thing will be they will have to do quite well over here," said Duff.

"The conditions won't be ideal - the tie will be played in the evening, so the weather won't be too much of a factor - it'll be quite cool - but Shakhter are very strong at the back with four experienced players and two that sit just in front of them, especially away from home.

"They're not the most mobile back four. If Celtic play short, sharp passing, they could penetrate them. However, at home, they'll come out and try to get a result - because at Celtic Park, it'll be hard for them.

"The stadium is state of the art - better than most SPL stadiums, it's a really fantastic place to play.

"Although, it's synthetic, and I think Celtic played Elfsborg on synthetic, so they'll be used to it. It's a modern stadium and it'll be packed to the rafters."