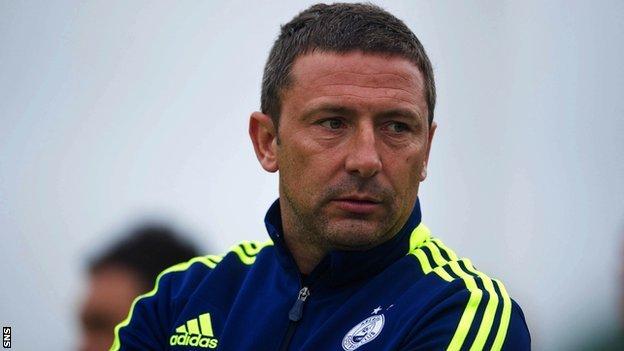 Aberdeen manager Derek McInnes has played down suggestions Sunday's meeting with Motherwell is an early contest in the battle for second place.

Motherwell were runners-up last season with Celtic winning the top flight and clear favourites to win this season's Scottish Premiership.

"Motherwell have proved themselves and they deserve that tag of being up there," said McInnes.

"We haven't and we've got work to do to prove that tag."

Both Aberdeen and Motherwell won their respective opening league fixtures against Kilmarnock and Hibernian.

And McInnes insists winning Sunday's meeting at Fir Park would be "a fantastic result and no more than that".

"I wouldn't say it puts down a marker," he said. "Again, I think that's getting ahead of ourselves.

"How can we say we are the two contenders for second spot when we've only played 90 minutes?

Stuart McCall's Motherwell exited the Europa League qualifiers earlier this week, with the 1-0 defeat in Russia completing a 3-0 aggregate loss to Kuban Krasnodar.

"I don't know how much they will be hurting," pondered McInnes. "I think the hurt probably came last week at Fir Park.

"Looking at the report from last night, I think Stuart was just full of pride for his players.

"I'm sure they'll just be reinforcing the message to make sure they're back there next year.

"Come Sunday, the Motherwell players will be more than ready to take part in a game against us."