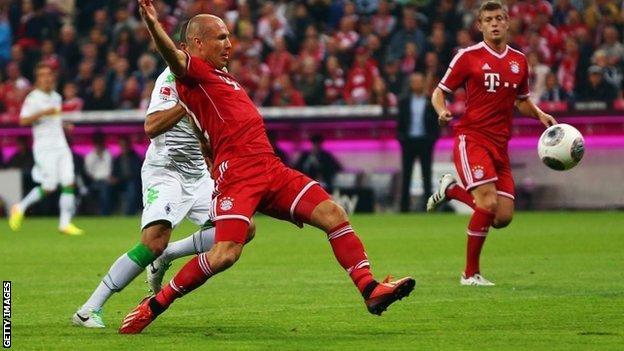 Bayern Munich began their Bundesliga title defence with a comfortable 3-1 home win over Borussia Monchengladbach to give Pep Guardiola victory in his first league game in charge.

Bayern won the title by 25 points last season and looked in control as Arjen Robben and Mario Mandzukic scored.

But an own goal from Dante gave the visitors hope before the break.

Thomas Muller missed a penalty for Bayern but they won a second one instantly which David Alaba swept home.

It was a satisfactory start at the Allianz Arena for Guardiola, but his side were not at their best defensively as Monchengladbach caught them on the counter-attack several times in the second half.

Under Jupp Heynckes, Bayern became the first team to win the Bundesliga, Champions League and German Cup in the same season.

And despite not naming summer signings Mario Gotze or Thiago Alcantara in their matchday squad they were 2-0 up inside 20 minutes.

First Robben ran on to a searching pass from Franck Ribery to poke past goalkeeper Marc-Andre ter Stegen before Mandzukic buried a rebound after Ribery had seen his effort saved.

Bayern dominated the rest of the half until Dante steered a cross from Juan Arango past Manuel Neuer and into his own net.

Monchengladbach had chances to level at the start of the second half with Max Kruse twice going close.

But Bayern then won two penalties inside a minute. First, Alvaro Dominguez handled but Muller saw his penalty kept out by Ter Stegen, only for Dominguez to concede another spot-kick as he handled Robben's follow-up.

Left-back Alaba took the second kick and steered it into the corner to give Bayern three points in the first league game of the new season.