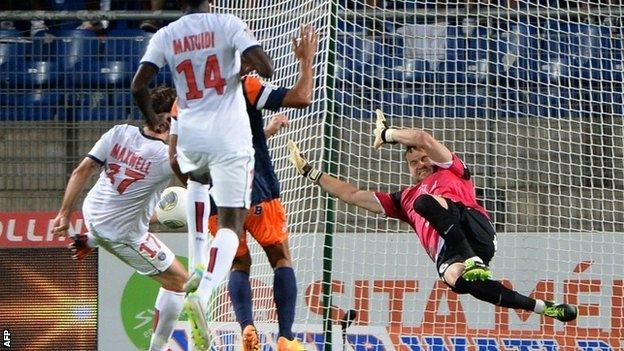 Paris St-Germain began the defence of their French league title with a 1-1 draw against Montpellier in Laurent Blanc's first game in charge of the Parisian club.

Former France boss Blanc, who took over from Carlo Ancelotti in the summer, is expected to to retain the Ligue 1 championship this season, but his side were made to work hard for the point at Stade de la Mosson.

Left-back Maxwell levelled 15 minutes into the second half after Remy Cabella had put the hosts ahead on 11 minutes.

Record signing from Napoli, Edinson Cavani, started on the bench and almost scored with his first touch when he was introduced on 72 minutes, but the £55m striker was denied by a crucial block by defender Siaka Tiene.

Montpellier were reduced to 10 men when defender Abdelhamid El Kaoutari was sent off for a second yellow card 18 minutes from full-time.

But the 2012 champions held off a late spell of PSG pressure to secure the draw.

On Saturday, promoted Monaco, who spent about £130m in the transfer market this summer, travel to Bordeaux.