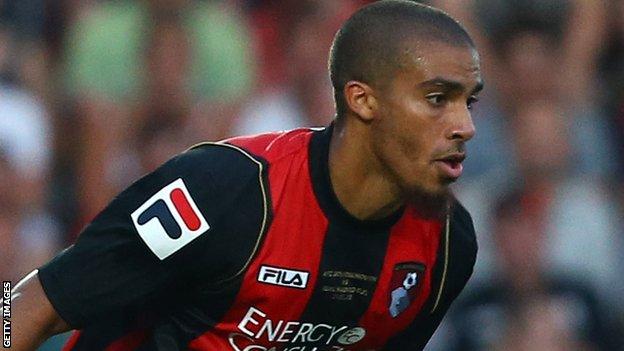 Bournemouth edged out Wigan as the visitors were reduced to 10 men in a fiercely contested, rain-lashed game.

The hosts went ahead just before the break when a mis-hit backpass by James Perch played in Lewis Grabban, who slid home his fourth goal of the season.

Leon Barnett nearly levelled but Marc Pugh cleared his effort off the line.

Wigan had needed a replay to dispose of the Cherries on their way to winning the FA Cup last season when the teams were two divisions apart, and the visitors' use of a five-man midfield supporting lone striker Grant Holt showed they did not expect the newly promoted Cherries to be a pushover.

Mixed seasons for Bournemouth and Wigan

Indeed, with the first half played in steady drizzle, both teams struggled to find their feet - literally at times - in the wet conditions, though Wigan looked dangerous on the break, with James McCarthy having a shot tipped over from distance, and Ben Watson heading over following a corner.

But with Scottish winger Ryan Fraser firing in some dangerous crosses from the right, the Cherries finally found their cutting edge as the first period drew to a close.

Grabban had scuffed his shot when presented with a one-on-one chance when Fraser latched onto a backpass in the first minute, but made no mistake this time, rounding Carson and waiting for the ex-England keeper to commit before sliding the ball under him from a tight angle.

The game came alive early in the second half, firstly when Jean Beausejour tangled with Pitman on the edge of the box and referee Graham Scott pointed to the spot, but Carson dived well to his left to preserve the one-goal margin.

Latics boss Owen Coyle responded with a double substitution, but McManaman - one of those replacements - lasted less than five minutes before he brought Pitman down in front of the visitors' dug-out, and Scott had no hesitation in showing him a straight red card, though the decision incensed Coyle.

The dismissal rather knocked the stuffing out of Wigan, as despite Pugh needing to block defender Barnett's effort following a corner, the Cherries closed out the win without too much alarm to retain their 100% home record this season.

Wigan's afternoon was summed up in the dying minutes as yet another backpass nearly sold Carson short as he miscontrolled the ball, while at the other end, Shaun Maloney blasted a free-kick from the edge of the box straight into the defensive wall.

"It is a big scalp. To beat the FA Cup holders at full strength cannot be underestimated. It is a great win even though they were reduced to 10 men.

"There were some naughty tackles in the game in the build-up to the red card. I thought it was a high challenge and his exuberance took him in a bit quick.

"I don't think it was malicious but I think it was a red card. He doesn't have a reputation, referees judge the tackles on their merit."

"I was one yard from the incident and Callum clearly won the ball. There is no doubt his momentum took him into the lad. I will certainly be appealing.

"If someone beats me fair and square I will hold my hand up, but I am not convinced that happened today.

"I thought the penalty award was soft as well and it seemed every decision that was given today went against Wigan Athletic but that is the way it can go sometimes."