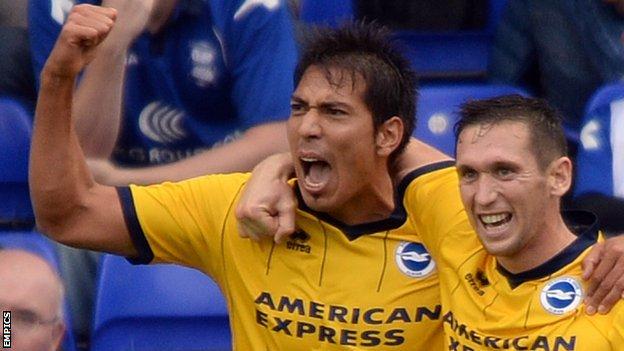 Oscar Garcia claimed his first win as Brighton manager thanks to Andy Crofts's winner at Birmingham.

Crofts then latched on to a Kemy Agustien pass to score with a measured strike.

Victory will come as a relief to Garcia after Brighton lost their opening three games of the season, following his summer appointment.

Defender Stephen Ward and midfielder Keith Andrews played influential roles on their full debuts for the Seagulls, while centre-back Matthew Upson impressed against his former side.

The game opened up in the latter stages and Agustien had a strike impressively saved by Randolph before setting up Crofts for the winner in the 73rd minute.

"It is frustrating and I cannot keep saying we deserved better from the game.

"If we keep giving away disappointing goals like we did against Brighton it has to be frustrating.

"The players have already seen the goal on the footage because I was so angry and disappointed because it was so poor. We needed to talk about it as soon as possible.

"They had five players in the move who were never pressed and the deep midfield runner had a free run to score. You cannot do that at this level because you get punished.

"I am gutted for the fans because the support they have given the squad is unbelievable and all I want is to give them some positive results."

"I am a pleased with the win but I am a person who does not look just at the result. I want to watch the overall performance.

"We knew that our performances in the other games have been good but we have not been accurate in front of goal. At this level the most important thing is the points. We want to build a successful team but it will take time.

"I want to dedicate the win to all the fans of Brighton, especially those who travelled to the game."