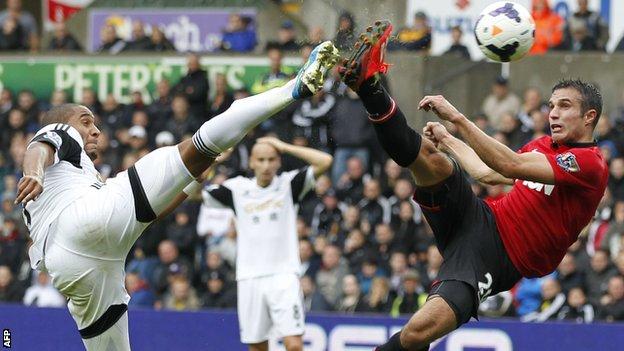 David Moyes made a winning Premier League start as Manchester United manager with the champions cruising to a comfortable opening day victory at Swansea City.

Moyes has been handed the task of defending United's title following Sir Alex Ferguson's retirement after 26 years at the end of last season - and this was business as usual with Robin van Persie the inspiration once more.

Unsettled Wayne Rooney made a 30-minute appearance as a substitute and was greeted warmly by United's travelling support despite his unrest at Old Trafford.

Swansea's early good work was undone as Van Persie and Danny Welbeck struck twice inside two minutes just after the half-hour and United were never again under serious threat.

Van Persie capped an increasingly impressive United performance with a magnificent rising strike 18 minutes from time after he was played in by Rooney before Swansea's record £12m signing Wifried Bony, on as a half-time substitute, made an impact with a late goal but it was not enough to disrupt United's path to victory.

Indeed there was still time for United to add a fourth in injury time as Welbeck showed great imagination and technique to lift a brilliant chip over Swansea keeper Michel Vorm.

It represented the perfect start for Moyes, who has publicly complained about United's tough opening hand of fixtures. Here, in driving rain and wind, they made light of this task at The Liberty Stadium despite some anxious moments.

New Manchester United boss David Moyes has made a better start than Sir Alex Ferguson did in their Premier League-winning season last year. United were beaten 1-0 at Everton, who were managed by Moyes.

United's fans showed their appreciation and support for their new Scottish manager throughout as he settles to the job of succeeding Ferguson, no doubt helped by this result.

The schedule does not get any easier with Chelsea starting United's Old Trafford season before a visit to Liverpool but this was the perfect confidence builder.

Rooney, subdued in United's pre-match warm up, watched from the sidelines as Swansea made a combative start, with new signing Jose Canas booked in the opening moments and on the receiving end himself as Antonio Valencia picked up a yellow card.

United keeper David De Gea almost saw a clearance charged in by Michu as he was left in trouble by a back-pass from Phil Jones, who had a shot turned over by Vorm.

Ryan Giggs may now have a place on United's coaching staff but Moyes clearly feels he still has a major role on the pitch and he could have given United the lead on two occasions.

He broke clear but some of the old pace has inevitably gone and he was caught, then screwed a shot across the face of goal after Vorm turned away Welbeck's shot.

Michu had the ball in the net for Swansea after De Gea pushed out Wayne Routledge's shot but the linesman's flag had already been raised.

Swansea were coping comfortably with United at this stage, with De Gea saving well from Michu, until they learned a lesson that has been handed out to many before - switch off for only a moment and the champions will punish you.

Inevitably it was Van Persie who broke the deadlock, showing wonderful athleticism to hook in a lofted pass from Giggs and Welbeck added the second two minutes later as he tapped in a simple finish from Valencia's cross.

Swansea manager Michael Laudrup made a double half-time substitution, sending on Bony and Pablo Hernandez for Routledge and Leon Britton.

Rooney made his introduction on the hour and after Canas headed off the line from Evra, his pass found Van Persie who advanced towards the edge of the area before unleashing a superb finish into the top corner that gave Vorm no chance.

Bony gave the home fans something to cheer when Hernandez took advantage of Welbeck's over-elaborate work and the signing from Vitesse Arnhem steered past De Gea.

Welbeck offered up the final flourish on what ended up as a routine victory on this highly-significant day for Moyes.

"For the first 30 minutes we were very competitive and at moments we dominated. You can come back from that but when they scored a second, against a team like Manchester United - it's difficult.

"The difference was in the in finishing but that second goal really destroyed us in many ways and we never really recovered from that.

"Three of their four goals were outstanding, but you can't say we played badly, especially in the first half."