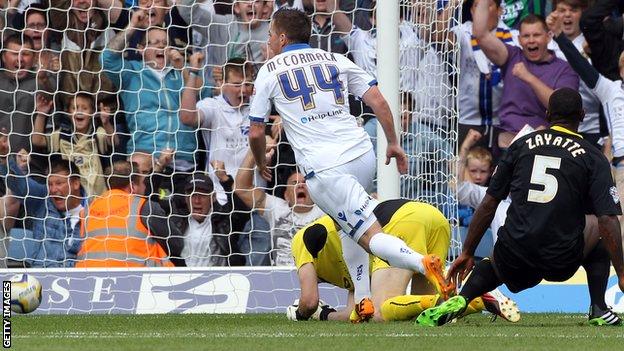 Sheffield Wednesday collected their first point of the season but could have taken all three against Leeds.

Defender Kamil Zayatte's looping header put the Owls ahead in the 37th minute.

Leeds equalised in the 58th minute with a brilliant individual strike from Ross McCormack, who cleverly beat Zayatte before coolly slotting the ball home.

The visitors went closest to a winner with Leeds keeper Paddy Kenny saving from Michail Antonio while a Giles Coke close-range shot was blocked.

Leeds had fought back from a goal down in their other games at Elland Road this season - the opening day 2-1 victory over Brighton and their 2-1 League Cup win against Chesterfield.

And they fell behind again when Antonio found space at the back post from a corner and the striker headed back across the six-yard box for Zayatte to score.

McCormack had gone close for Leeds with a clever chip in the 32nd minute that Chris Kirkland tipped over the crossbar.

Ross McCormack has scored 31 goals in 112 games for Leeds since joining from Cardiff in August 2010.

But the Scottish striker found the net in the second half when he knocked the ball around Zayatte and dashed past the defender on his other side before sliding the ball beyond Kirkland.

Antonio's powerful drive on the angle was kept out by Kenny while Leeds' best chance of a winner came in stoppage time but McCormack could only fire a stoppage-time free-kick into the wall.

Leeds manager Brian McDermott on striker Ross McCormack, who has been the subject of interest from Middlesbrough:

"I want him to score those goals in August, July, September, any time because that's what football's all about - that bit of quality.

"I said to the lads at half-time, let's not wait for anything, let's grab it, someone grab it and he certainly did that. It was a fabulous goal.

"We've turned down two or three bids and you know my view, that's not changed. I've spoken to Ross and you saw the quality that he brings.

"You saw his celebration as well. He loves this football club and I like working with him. As far as I'm concerned, Ross wants to be here, I want him to be here, that's their prerogative to do what they like."

"We had the chances, we might have had a penalty and in the end we were unlucky. We should have done better for their goal and we will continue to work on those situations.

"But overall we have done ok, we are off the mark and now we move on to the next game."

"Lewis Buxton was absolutely magnificent. He came into the team today on the back of three days training and you wouldn't have thought he had been away."