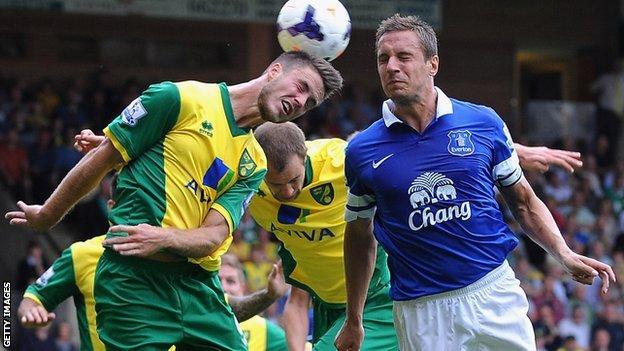 The Canaries took the lead against the run of play after the break when Steven Whittaker shot home from a tight angle after his initial strike hit the post.

Ross Barkley capped a superb display to level from long range and Seamus Coleman tapped in to make it 2-1.

The Netherlands international striker's towering header into the top corner will have given plenty of encouragement to a City side whose eagerness to improve on last season's 11th-placed finish was clear from their hectic summer transfer dealings.

Having spent around £25m during the close season, manager Chris Hughton could have a difficult time tempering the rising expectations around Carrow Road.

Most of the strengthening came in attacking areas with Hughton clearly mindful of the need to bolster a side who managed just 41 league goals last time out - the third worst in the top flight.

Only two of their seven new faces started, but both Van Wolfswinkel and winger Nathan Redmond made promising debuts.

However, the visitors, inspired by a sensational performance from 19-year-old Barkley, showed the greater control and quality in a match that exploded into life after the interval.

Roberto Martinez may have been taking charge of his first competitive match as Everton boss, but the line-up and performance had all the hallmarks of his predecessor David Moyes.

The midfield had a familiar feel with Leon Osman, Steven Pienaar and Kevin Mirallas typically busy and tidy.

But the classy Barkley caught the eye for the Toffees, finding space with impressive ease and linking up brilliantly with his more experienced colleagues.

Barkley blazed one shot over and Marouane Fellaini headed over from a corner but Everton's best first-half openings fell to Mirallas, who dragged one shot just wide and had another goal-bound effort blocked by Russell Martin.

Norwich have now not won an opening-day fixture in the last 11 seasons, with their last top-flight victory coming in 1992 when a Mark Robins hat-trick helped them secure a stunning 4-2 win against Arsenal at Highbury.

Norwich's only noteworthy chance of the first half saw Van Wolfswinkel mistime his leap and make a mess of an Elliott Bennett cross.

Mirallas again went close soon after the restart after excellent work from Coleman.

But the home side took the lead when right-back Whittaker made the most of a lucky ricochet to score from a tight angle after his initial strike rebounded off the left-hand post.

Everton responded in fine style and it was no surprise that Barkley provided the inspiration. The teenager, making just his fifth league start for the Toffees, crashed his side level with a fabulous 25-yard strike that flew across Ruddy and into the far corner.

And within five minutes it was 2-1 to the visitors when a delightful pass by Pienaar found Nikica Jelavic inside the box and, although the Croatian's shot was saved by John Ruddy, Coleman followed up to knock the ball in from close range.

It was the home side's turn to show their spirit and although there was another slice of luck about their goal, the finish from Van Wolfswinkel was wonderful as he rose to head Whittaker's mis-hit cross into the top corner.

Both sides threatened in a frantic finale, but the visitors came closest to taking all three points when Martin blocked a Jelavic shot moments after Ruddy had thwarted Steven Naismith from point-blank range.

"He's certainly done today what we wanted him to do. That's about working hard for the team. He certainly gave us a good outlet up front. He's a willing runner up front and I'm really pleased for him. It was certainly a nice feeling to get a goal on his debut.

"He is someone that is used to scoring goals. The challenge now is to do it at the top level.

"He certainly works hard and I think he will be a threat. We need to provide him with the service. We got in some really good positions and perhaps our quality let him down a bit.

"I think it was a fair result. They showed what a good side they are. They are seasoned side so we are delighted with the result. You want to win every home game but overall I am quite happy."

"You want to have as many players who can give you something special as you can. Ross has got that talent. I think we have a few throughout the squad. And that's important for competition. I'm pleased with the manner in which he wants to learn and to listen and wants to develop. To have a player with that ability at that age is an incredible asset.

"He's been at Everton for a long time and he's had his problems with injuries. I can only speak about his attitude and the way he looks after himself and the way he works in pre-season. I'm pleased he's been able to show everyone he's ready.

"That's what important about his play. He can understand what he needs to do to be effective off the ball. He wants to take information in and wants to understand. I thought he was perfect at it.

"Conceding two goals made it difficult but we created some good chances and showed some good signs. In general terms I am delighted. We looked like a team that could create enough chances. It was a very positive start from a tricky fixture."