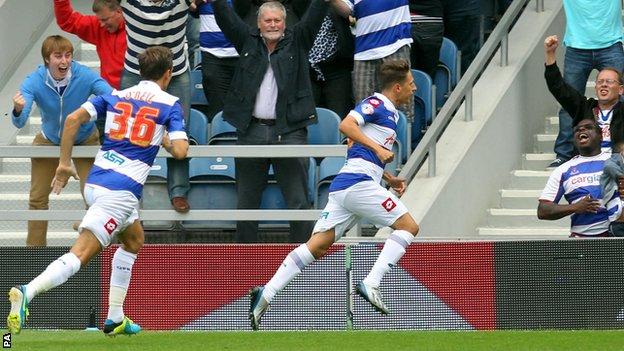 Debutant Tom Hitchcock scored in the last minute to give QPR victory over Ipswich at Loftus Road.

The 20-year-old substitute, the son of QPR coach Kevin, tapped the ball into an empty net after Scott Loach parried Charlie Austin's effort.

By that stage, QPR had hit the crossbar twice through Clint Hill and Austin.

Ipswich did not create many clear chances, with Daryl Murphy's weak shot from close range kept out by QPR goalkeeper Rob Green.

Who is Tom Hitchcock?

Hitchock, 20, was making his debut for QPR as an 83rd-minute substitute.

The son of QPR goalkeeping coach Kevin, he has had loan spells in League Two with Plymouth and Bristol Rovers.

The game did not come without cost for QPR, who lost winger Junior Hoilett to a hamstring injury early in the second half.

QPR were relegated from the Premier League last season but have retained several international players and made some impressive summer signings.

They dominated Ipswich and Shaun Wright-Phillips and Nedum Onuoha wasted chances. Austin, a reported £4m signing from Burnley, had one effort blocked by Tommy Smith and a shot saved by Loach.

It looked like QPR had squandered the chance of victory as Hill headed Joey Barton's free-kick against the crossbar and Austin's powerful drive hit the underside of the bar when he should have scored.

But they got their winner when Loach could not hold on to Austin's shot and Hitchcock netted.

"We're everything that we weren't last year - everybody's together and you do feel that.

"If I'm really honest, I think we're short in the creativity department. You need goals and creativity and I think Harry likes that too. So I don't think we're finished yet. I think we might do a bit of business between now and the end of the window. We'll add to our squad if we can."

"That will be a happy household [the Hitchcocks] tonight. It was getting late in the game so we thought we'd try him - and there he was at the far post.

"We had a number of chances and when Charlie hit the bar we thought maybe it wasn't going to be our day, but the lads kept going and we did it in the end.

"We hope that when we look back at the end of the season days like this will be important for us."

"I don't think they should have beaten us.

"We just didn't do enough in that 90th minute. I thought it was going to be a good point until we didn't defend in the last minute.

"I'm pleased with the group of players I've got, but playing well and getting beaten isn't my idea of fun. We've been beaten so have got diddly squat to show for it.

"I thought it was going to be one of those days when Rob Green pulled off a save from Daryl Murphy. We were even with them, certainly in the first half. But if we want to contest the top six then pretty good has got to become good - we've got to get points.

"The players are bitterly disappointed, as you'd expect them to be. It's got to be a point and we haven't got one, so there's no point patting ourselves on the back."