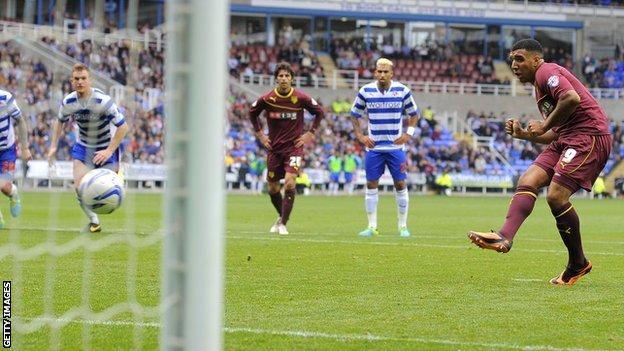 Diego Fabbrini scored a late goal to rescue a draw for Watford at Reading.

The home side took the lead through Adam Le Fondre's powerful left-footed strike and Jem Karacan bundled in from a set-piece to add a second.

Watford's Marco Faraoni scored a header but Karacan slotted in a Le Fondre knock down to restore a two-goal lead.

Troy Deeney converted a penalty for the visitors after Danny Guthrie's foul on substitute Fabbrini, who prodded home in the 89th minute.

The result ended Watford's 100% start to the season as they were knocked off the top of the Championship table by Nottingham Forest, who beat Bolton 3-0.

Reading's opener came after Watford keeper Manuel Almunia could only punch a Jobi McAnuff cross to Le Fondre, who sent a first-time volley into the top corner.

The Royals were on top and deservedly extended their lead when Karacan latched on to an Alex Pearce header across goal to score at the second attempt after his initial shot had been saved.

Faraoni nodded home from close range to reduce Watford's deficit, only for Karacan to respond.

Deeney's coolly taken spot-kick set up an exciting finish and, when a deflected shot fell into Fabbrini's path, he completed Watford's comeback.

"It was a cracking game of football. It really was. But for a late deflection we could have won the game.

"We changed our formation to play against a side who are very good. We got on the front foot. It was an excellent goal from Adam Le Fondre and then we did well to go in at half-time 2-0 up and we deserved that.

"They got themselves back in it with a header but then Jem got his second and at 3-1 up you are in a good position and then we gave away a penalty.

"Was it a penalty, wasn't it? It doesn't really matter because it was given by the assistant referee. And then it was game on and very exciting and they got a goal at the end.

"The game was far too open and we gave possession away too easily we could not see the game out thanks to a deflection falling into the path of their player. There were a lot of positives going forward and we played good football, and but for a late deflection we could have been celebrating."

"It feels good not to lose that game. It was difficult to see how we could get anything at half-time when we were 2-0 down.

"I told the players at half-time that it was not enough. I thought we were scratching their back and they were punishing us.

"It pleased me that we never gave up. That is the good thing about this side, sides can score one or two goals against us but we will not be beaten easily. I am delighted we have that quality.

"There are a lot of new players in the squad and lots of them are foreign and maybe they thought that the game builds slowly like in some other leagues, but they need to learn to start games with a high intensity or they will be punished."