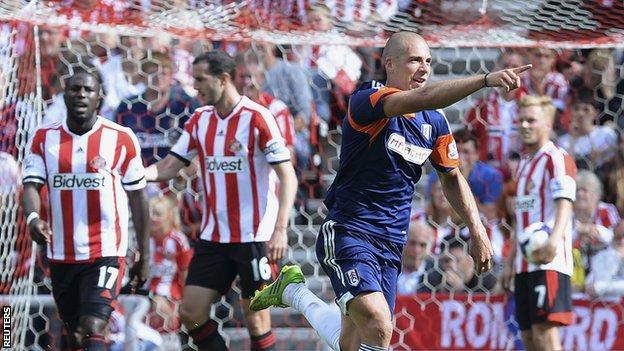 Pajtim Kasami scored his first Fulham goal as they beat a dominant Sunderland on the opening day of the season.

The Black Cats, with five debutants, were the better team throughout but Kasami headed home from close range for the only goal in the second half.

Ondrej Celustka had the hosts' best chance but his 25-yard shot was saved brilliantly by Maarten Stekelenburg.

Ondrej Celustka - a right-back on loan from Trabzonspor

Valentin Roberge - a defender signed for free from Maritimo

Cabral - a midfielder signed for free from Basel

Emanuele Giaccherini - an attacking midfielder signed from Juventus for £6.5m

Maarten Stekelenburg - a goalkeeper signed for a reported £4m from Roma

Derek Boateng - a midfielder signed for free from Dnipro

Adel Taarabt - an attacking midfielder signed on loan from QPR

Ji Dong-Won could have rescued a point for Sunderland in the final minute but he headed Adam Johnson's cross wide.

Despite their win, the day ended on a worrying note for Fulham as £4m summer signing Stekelenburg came off injured and was replaced by David Stockdale.

Stekelenburg picked up a shoulder injury while denying Jozy Altidore, who was Sunderland's most lively debutant.

The United States striker, who moved from AZ Alkmaar this summer, caused Fulham's defence problems throughout. The 23-year-old looks to have bulked out since his teenage loan spell at Hull City, when he scored only one goal in 28 Premier League appearances.

But Sunderland failure to score will have caused some concern for manager Paolo Di Canio, who took over towards the end of last season and steered them to safety from relegation.

The Italian made 10 summer signings and named half of them in his starting line-up. Three of them had efforts in the opening minutes, with Altidore's shot being defected for a corner, before Emanuele Giaccherini blazed over and Cabral failed to beat Stekelenburg with two efforts.

Fulham's day did not start well as left-back Kieran Richardson came off with a hamstring injury within 20 minutes and had to replaced by Matthew Briggs.

Sunderland were in the ascendency and right-back Celustka hit a wonderful half-volley from distance but Stekelenburg pulled off a great fingertip save to deny him.

The second half took the same pattern, with Adam Johnson curling a shot wide after a great counter-attack.

But they were made to pay for not scoring when Kasami lost Valentin Roberge to head home from close range at the far post from Damien Duff's corner - Fulham's first effort on target.

It was only a fourth Premier League start for 21-year-old midfielder Kasami, who spent the second half of last season on loan at Swiss side Lucerne.

Sunderland continued to push but Cabral, Johnson and Altidore all missed the target before substitute Ji squandered a great chance for a point when he headed wide.

Sunderland boss Paolo Di Canio: "We played attractive football and dominated but in this country more than any other, set-pieces can cost points. It wasn't even an incredible challenge in the air.

"We played in their half for 80 minutes and delivered 30 balls into the opponents' area but didn't put the ball into the net. The only clear ball into our box cost a goal.

"I warned my players before - the players from abroad have to learn. I don't remember Keiren Westwood having the ball in his hands except when he was getting the ball from the net.

"If my players learn quickly why we lost the game, we will have a very good season."

Fulham boss Martin Jol: "I think it was a perfect away result but not a perfect performance. We had to grind out the result. It was a very scrappy game for us.

"Sunderland put so many players up front - they had four attacking players. We didn't do well at times. We have to try to control the midfield - we didn't do that in the first half and couldn't keep the ball. Against an energetic Sunderland team... it was a bit easier than we thought, in hindsight.

"We showed good team spirit. Adel Taarabt had to play 90 minutes despite not having a pre-season, similar for Kasami and Briggs."