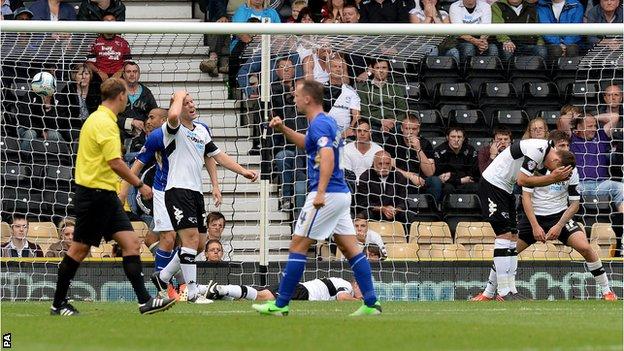 Leicester beat East Midlands rivals Derby thanks to a first-half own goal from goalkeeper Lee Grant.

The only goal came when Jamie Vardy's flick was cleared off the line by Paul Coutts, but the ball hit Grant and went into his own net.

Kieron Freeman had a chance to level in the second half but Kasper Schmeichel kept out his shot.

The impressive Will Hughes shot wide for Derby before setting up Jamie Ward, whose shot was blocked.

These East Midlands rivals have been playing each other in the league since 1907, with Derby winning 42 of the 97 matches and Leicester 30.

England Under-21 international Hughes, 18, has been linked with several Premier League sides and put in another eye-catching performance at Pride Park in front of a crowd of 23,437.

Within two minutes he took part in a move that saw Jonny Russell claim he was fouled on the edge of the area - but nothing was given.

Derby continued their early pressure and Craig Bryson fired over before Leicester striker Vardy forced a save from Grant with a drilled effort.

The Foxes broke the deadlock courtesy of Coutt's botched clearance after Liam Moore headed down a corner, and they had a chance to double their lead when Chris Wood was thwarted by a great tackle from Richard Keogh.

"We had a great start to the game. We were on the front foot and were creating chances and then around the time of the goal they came back into it. But 10 minutes into the second half, I thought we controlled the last 30 minutes and played some very good stuff.

"There were lots of nearly moments in the game for us but I thought it was a good enough performance to get something and if you deal with the corner, the bare minimum you come out with is a 0-0 and you keep the unbeaten run intact and move on.

"I think defensively they are one of the best sides and one of the most difficult sides to score against but we certainly had enough situations that we didn't quite turn into chances but we had enough in the second half to get a goal.

"We are OK, we are in good spirits. We know we've played well again and we are happy with the squad and the way we are trying to play. We've had a little setback and we will use that as an incentive to try and go on an unbeaten run before the international break."

"We've started the season OK but performance wise we still have a lot to do.

"We didn't play particularly well today, I think Derby managed the ball very well but ultimately we've come away with the three points. I'm not going to moan too much but we are a lot better than that.

"I look at the positives, it's a clean sheet, we've won, there's room for improvement and it's nice to get two away wins."