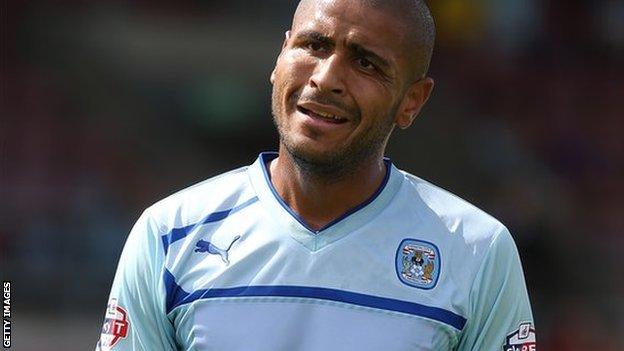 Early goals from Leon Clarke and Franck Moussa set Coventry on their way to victory at Carlisle.

Clarke fired them ahead from 20 yards in the fourth minute and Moussa scythed through the home defence to chip over Mark Gillespie two minutes later.

Carlisle's James Berrett had a penalty saved by Joe Murphy before Billy Daniels slotted in for 3-0.

Clarke pounced on a defensive error to complete the win, while Carlisle have let in 13 goals in three league games.

"Don't expect me to dress it up and deflect from it - I'm bang rock bottom.

"I've never been quite as low as I've been here. I didn't get relegated many times in my career, but if we continue like that we will be, but we're better than that.

"They were so pumped up in the dressing room we can't lift them any more.

"They were ready but then that goes against you and absolutely knocks the stuffing out of you. Then the key moment again to give us a fighting chance in the game, we miss a penalty."

"To be honest, the only disappointing thing is that we could have scored more.

"But it's also easy to overlook Joe Murphy's penalty save when we were 2-0 up. That was absolutely huge for us.

"It helped us to go on and get the other goals as well as keeping a clean sheet, which was just as important.

"I also thought that our midfield and full-backs were magnificent again."