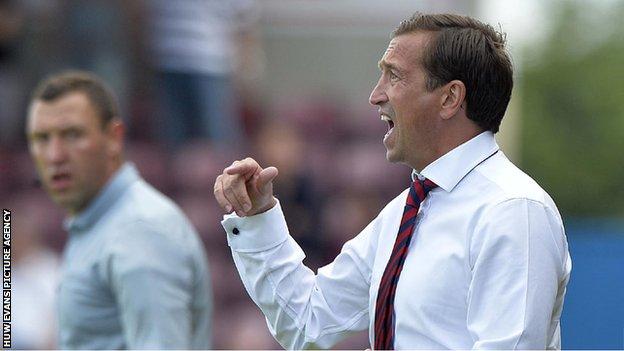 Newport County manager Justin Edinburgh was proud of his team's display in Northampton in spite of their 3-1 loss.

The Welsh team dominated for long periods and had 17 shots on goal compared with the Cobblers' eight.

But they still suffered their first defeat since regaining a place in the Football League after a 25 year absence.

"I've got no problem with the performance, I'm proud of the players," said Edinburgh.

Northampton goalkeeper Matt Duke pulled off a series of superb saves and was named man of the match.

Newport striker Chris Zebroski also hit the crossbar with a header in the second minute of the game.

"I think the scoreline was very harsh on us," said Edinburgh.

"Anyone who was here today will know we gave a very good account of ourselves and the score doesn't reflect the game really.

"To come to place like Sixfields and for long periods of time put the home team on the back foot and make them play on the counter attack is a good performance.

"We're disappointed probably for a five minute spell in the first half we lost our way a bit but other than that I thought we gave a fantastic account of ourselves."

The result came at the end of a week which saw County beat Accrington Stanley 4-1 in their first League Two outing and then knock Championship side Brighton out of the Capital One Cup.

Their next game is the derby match against Bristol Rovers at Rodney Parade on 17 August.

Edinburgh hopes to sign a defender on loan before then, admitting his side are short in that department following the injury suffered by Byron Anthony.

The former Cardiff City academy player suffered a double fracture to his right ankle in the match against Brighton.