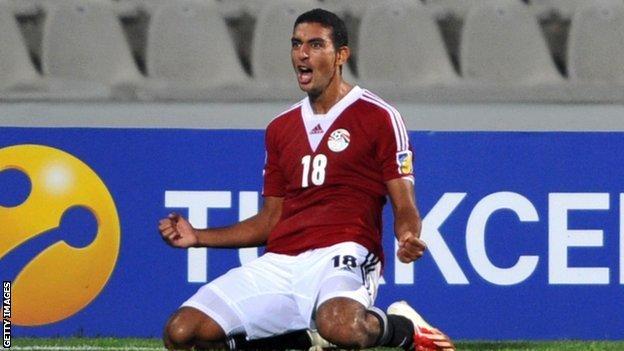 Despite a state of emergency being declared on Wednesday in the country, Egypt beat visiting Uganda 3-0 in an international football friendly.

The match was played in the coastal town of El Gouna, 430km from Cairo, away from the violence that erupted during the day.

Ahmed Hassan Koka (pictured), who plays in Portugal for Rio Ave, scored the first for the Pharaohs midway through the first half.

The second goal came 12 minutes after the break when joint-top scorer in African World Cup qualifying Mohamed Salah was on target.

The win for Egypt, who have already qualified for the final round of World Cup play-offs in Africa, was secured with a gaol from Ibrahim Salah with six minutes left on the clock.

Egypt were without the Al Ahly and Zamalek players who were preparing to play in the African Champions League this weekend and Hull City's Ahmed Elmohamady was missing through injury.

The Uganda Cranes were preparing to face Senegal in neutral Morocco next month in a crucial 2014 World Cup qualifier.

Senegal's warm-up game was in France where they drew 1-1 with 2012 Africa Cup of Nations winners Zambia.

In New York, Didier Drogba's return to the Ivory Coast team could not prevent African's top-ranked side from suffering a comprehensive 4-1 defeat to Mexico.

Drogba, playing his first game for the Elephants since being dropped after the Africa Cup of Nations in February, scored a penalty in the 61st minute but his side were already 3-0 down by then.

Mexico had taken the lead via an own goal in the 10th minute and Oribe Peralta scored two more in the first half. Angel Reyna completed the scoring with a goal in the 90th minute.

Asamoah Gyan came on as a second-half substitute to rescue a 2-2 for Ghana against Turkey in Istanbul.

The hosts scored both goals in the first half through Burak Yilmaz and Umut Bulut.

Gyan, who was rested for the first-half because his club in Al Ain in UAE have been on a break during the Ramadan fasting period, came on 10 minutes after the break.

He pulled one back with a fierce shot just six minutes after coming on and then headed the equaliser in the 75th minute.

Another substitute to make an impact was Uche Nwofor, who plays in the Netherlands for VVV Venlo, as Nigeria beat hosts South Africa 2-0 in Durban.

The striker, who plays for VVV Venlo in the Netherlands, also scored a second-half brace as the Super Eagles won the annual Mandela Challenge.

However, Super Eagles coach Stephen Keshi was left unimpressed by what he saw.

"I'm not very satisfied with what we did today because we can do much better,'' Keshi said. "We're building a team and bringing everybody back gradually. We're getting the confidence level and getting everybody ready for our World Cup qualifier against Malawi.''

Malawi warmed up for that must-win game in Nigeria with a 1-0 win in Rwanda.

Atusaye Nyondo with the only goal of the game for The Flames from the penalty spot on the half-hour mark.

Also on Wednesday, Algeria drew 2-2 with Guinea after leading 2-0 at half-time,.

Algeria started superbly with Adlene Guedioura and Abdelmoumene Djabou netting during the first quarter of the Blida friendly but Salim Cisse and Oumar Kalabane goals during the second half salvaged a draw for Guinea.

After a loss in Jordan last weekend, Libya were hoping to bounce back by defeating Central African Republic in Tripoli, but had to settle for a disappointing 0-0 stalemate.

Kuwait-based striker Issam Jemaa bagged a brace after Wahbi Khazri put Tunisia ahead in a 3-0 triumph over Congo-Brazzaville in Tunis suburb Rades.

And in Tangier, Burkina Faso beat hosts Morocco 2-1, thanks to a brace from Chelsea youngster Bertrand Traore. Abdelaziz Barrada scored midway through the second half for Morocco, halving their deficit but it proved to be only a consolation.