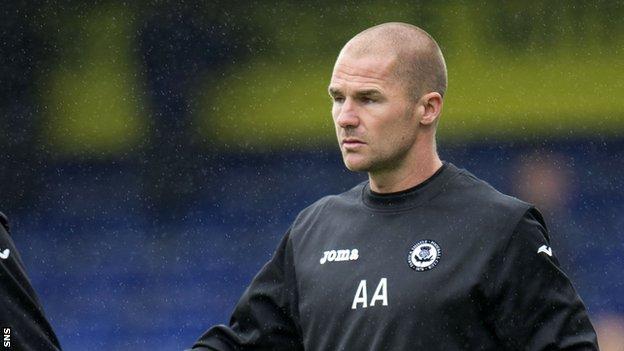 Partick Thistle manager Alan Archibald felt his players worked hard to earn their first victory back in the top flight against Ross County in Dingwall.

The Jags were 3-1 winners against County, following a goal by Kris Doolan and a second-half double from Steven Lawless.

"We worked hard all week on the back of the Dundee United game and I thought we took that into today."

Graham Carey pulled one back for the hosts, but the match left the hosts without a point from their two opening matches and pushed Thistle to the second-top slot in the table after two matches played.

It could have been 4-1 to the visitors with Kallum Higginbotham firing into the back of the net, but referee Alan Muir sided with his assistant and ruled it out for offside.

Archibald's initial reaction was to assume the goal should stand, but later revised his opinion when he had an opportunity to view the replay.

"At the time, I thought it was a goal because it was fresh in my mind that St Johnstone scored a similar goal [against Hearts last week] and it was allowed," said Archibald.

"But when I saw it played back, John Baird does run across the front of the ball - he doesn't touch it - but it's a grey area and it's hard for the referees."

Following their 0-0 draw with Dundee United in last Friday's opener, Thistle now have four points from two matches and Archibald says it's the result of rigorous training and discipline among his squad.

"We showed our confidence and I think a couple of the guys up the pitch like Steven Lawless and Stuart Bannigan were unplayable," he added.

"All of it comes from a good back line and good organisation in the field.

"We work hard in training and every game deserves its merits to work hard. You have to change things for some teams you play against, and I think it worked today.

"We're at home next week, so hopefully we can take confidence from today's performance and last week's as well, and get a victory.

"We know it's only two games in, there's a lot of hard work still ahead of us."