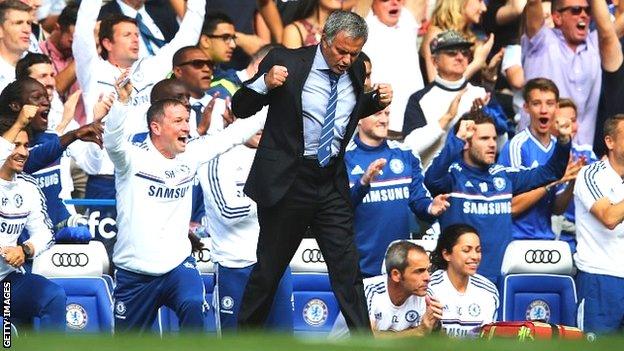 Lampard had an early penalty saved by Allan McGregor, before Kevin de Bruyne set up Oscar to slot the hosts ahead.

McGregor again thwarted Lampard, but the England midfielder responded with a superb free-kick to double the lead.

Newly promoted Hull rallied after half-time but could not force their way back as Chelsea comfortably secured the win.

With his comeback match going to plan, Mourinho can now turn his attention to Wednesday's visit of Aston Villa.

Mourinho had said of his return to Stamford Bridge, "It's my dugout, my stadium, my people", and so it appeared as he emerged from the tunnel before kick-off to ear-splitting noise and a spine-tingling ovation.

The - when he arrived in 2004 it was the "Special One" - waved to all sides of the ground and blew kisses to the fans before taking a seat as his new team set about dismantling the visitors.

There were three survivors from the line-up that started the opening match of his first spell - Petr Cech, John Terry and Lampard - while De Bruyne was handed a debut after spending last season on loan at Werder Bremen.

It was an artillery that pinned Hull back from outset and the Tigers, with six new signings handed starts, struggled to get out of their own half.

De Bruyne fired over and Hazard saw a shot blocked, before McGregor's attempted clearance ended with him punching Torres in the head to concede a penalty. The Scotland goalkeeper made amends by diving to his right and beating away Lampard's spot-kick.

But rather than reversing the momentum, it merely encouraged Chelsea to attack with even greater intent, their dominance telling when De Bruyne released Oscar to poke Chelsea into the lead.

"Romelu Lukaku looked good, and he is the future of Chelsea Football Club although Fernando Torres will argue it's harder to play at the start than at the end. Chelsea fans will be shouting for Lukaku, they have seen that he can do it now for them."

The Blues were stirring, and, despite denying Lampard for the second time, McGregor could do nothing to stop the midfielder's swerving set-piece from around 30 yards.

Replays suggested James Chester did not touch Torres for the free-kick, but referee Jonathan Moss felt the Spaniard's path was blocked.

Hull did not create a chance of note in the first half, which ended with Lampard going close and McGregor expertly clawing a Branislav Ivanovic header off the line. Hawk-Eye graphics showed it did not cross.

Bruce introduced two more new signings at the break - Tom Huddlestone and Jake Livermore - and his side carried a greater threat as Chelsea failed to display their previous urgency.

Chelsea felt they deserved a penalty when Brady challenged Ivanovic but Hull were soon back on the front foot and Cech needed to be alert to stop a Curtis Davies header from Ahmed Elmohamady's cross.

Romelu Lukaku came on for the ineffective Torres and the Belgian almost contributed to a Chelsea third, but fellow substitute Andre Schurrle chipped over the advancing McGregor, narrowly clearing the bar.

"It was always going to be a difficult afternoon for us and the first half-hour was very uncomfortable.

"We knew when the fixtures came out it would be difficult. Not many teams in the world would have been able to live with Chelsea in that first half-hour.

"We knew it would be difficult but our season will be defined by games like next week. No disrespect to Norwich, but we have to pick up points against teams like them.

"It's a difficult league with good players and good teams. It will be difficult for us and we're under no illusions. It's nice to be back. No disrespect to the Championship but if you have anything about you, you want to be playing at places like this."