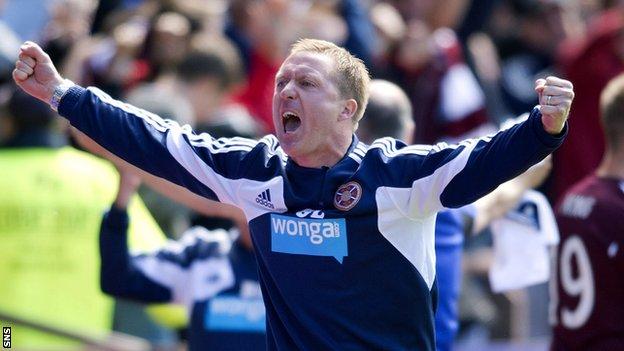 Hearts manager Gary Locke has dedicated their Edinburgh derby victory over Hibernian to the club's fans.

Callum Paterson's header 20 minutes from the end gave the Midlothian club their first three points of the season.

"It was a huge win and I'm delighted for the supporters because they've been through so much this summer," he told BBC Scotland.

"I'm sure they will be pleased. The backing they have been giving the club at the moment is unbelievable."

Locke added: "The players gave them a performance that their support deserves."

It was a moment of brilliance from Dylan McGowan who produced a delightful ball for Paterson to head in at the near post in a match which otherwise lacked real quality in front of goal.

Nevertheless, Locke was pleased with the effort and commitment shown by his players, and the result which ensures Hearts chipped away at their 15-point penalty after going into administration.

"I was delighted with their application and work-rate. It was a great cross from Dylan McGowan and that was a goal worthy of winning any game. It was always going to be a tough test," he added.

"It's a big deficit to eat into. We've narrowed it to (-12) points if we can keep winning, the gap can get closer so that's all we can do. If I get a performance like that every week, we won't be far away."

Hearts midfielder-cum-striker Ryan Stevenson was taken off and is believed to have damaged his medial ligament following a clash with Hibernian's Rowan Vine early in the first half.

With the Jambos' squad already stretched, with just 13 regulars remaining, Locke admits it is a massive disappointment to lose one of his first-team stars.

"It's a huge blow to lose Stevenson," he continued.

"We'll wait till Monday when he gets a scan. He's certainly not a player that I would I like to lose for a long period of time.

"It was a bad one. We can't afford to lose players for long periods, we've hardly got any as it is. Hopefully Ryan can make a quick recovery and get him back in the team."