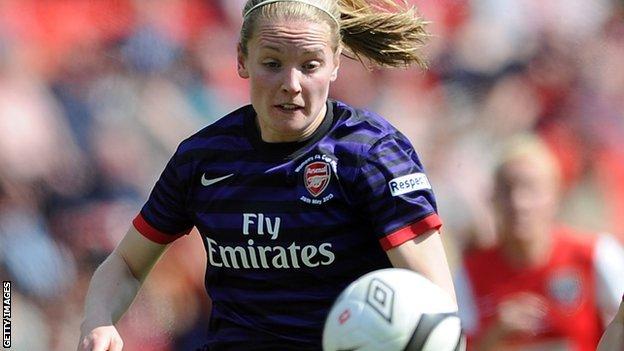 Arsenal stepped up their challenge for a third successive Women's Super League title with a 5-0 win against Everton.

Two goals from Danielle Carter and one apiece for Kim Little, Gemma Davison and Jordan Nobbs secured an emphatic victory over the Toffees.

Victory took the Gunners ahead of Chelsea, who lost 2-0 at Lincoln.

Chelsea were also overtaken by Birmingham City, who climbed into fourth place with a 1-0 defeat of bottom club Doncaster Belles.

Three days after beating the same opponents 4-0 in the Continental Cup semi-final, the WSL champions again proved far too good for the Merseysiders.

Victory took Shelley Kerr's team to within five points of the top two, Liverpool and Bristol Academy, with two games in hand on both pacesetters.

Little doubled the lead with a 22nd-minute penalty following a foul on winger Davison.

As Everton hit back, striker Brooke Chaplen sent a 27th-minute header against the woodwork - but 60 seconds later the visitors were 3-0 down.

Carter grabbed her second of the afternoon, once more turning in a cross from White, before combining with Davison, who netted the fourth eight minutes into the second half.

Good interplay between White and Carter then led to Nobbs adding the fifth in the 67th minute - the midfielder's fourth goal in three games.

Striker Courtney Sweetman-Kirk twice went close as the Imps made the early running.

And the home side took the lead when Horwood's 19th-minute curling corner dropped just under the bar.

Lincoln soon regained control and winger Jess Clarke went close to adding a second goal in the early stages of the second half.

The home side continued to press and were rewarded when Cantrell forced in the clincher from Horwood's 88th-minute corner.

Striker Melissa Lawley hit the late winner, but Blues had to recover from a slow start.

Donny edged the early stages and it took a fine save by keeper Mary Earps to deny striker Jess Sigsworth a 10th-minute opener.

Defender Ashleigh Mills then struck a 24th-minute effort against the post as the visitors continued to look the more likely side to break the deadlock.

Birmingham improved and created several half-chances after the interval, but it took them until seven minutes from time to find a winner.

Substitute Laura Bassett's pass set up Lawley, who drove a shot just inside the far post.