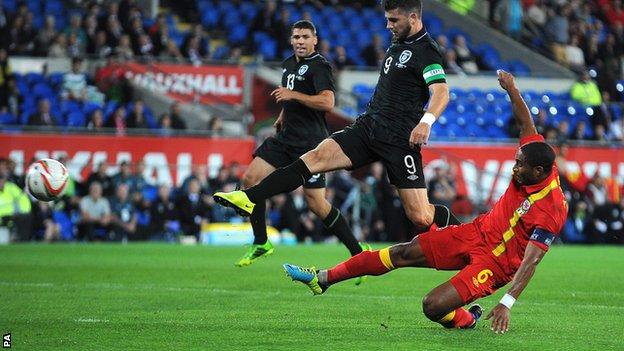 Republic of Ireland missed two late opportunities as their friendly against Wales in Cardiff ended goalless.

As the injured Gareth Bale watched from the stands, Chris Coleman's Welsh team registered only their second clean sheet in 15 home games.

And with World Cup qualifiers coming up in September, both managers will be happy not to have conceded goals.

With the Premier League season kicking off in three days, the game lacked the bite normally expected of a match between neighbouring countries.

However, the same could not be said of Wales captain Ashley Williams who played superbly at the heart of the Welsh defence.

He needed to be on form as the Republic had most of the play and the better of the chances after an opening half when neither goalkeeper had to make a save.

The closest Wales came in the opening period was when Cardiff's Craig Bellamy found Swansea's Ben Davies with a quickly-taken corner, but the defender fired wide.

Craig Bellamy made his 74th appearance for Wales in the 0-0 draw against Ireland - overtaking Peter Nicholas and record goal scorer Ian Rush.

Earlier Long had failed to test his West Brom team-mate Myhill from eight yards with the goal at his mercy.

Bellamy's 30-yard free-kick finally forced a save out of Keiren Westwood in the Republic goal in the 54th minute.

It was the first save by either goalkeeper in the match, but Myhill found himself under pressure as the Republic went for the win in the later stages.

At the other end Giovanni Trapattoni's Republic defence in particular looked untroubled for the most part.

Wales face Macedonia and Serbia, and while qualification appears to be a forlorn hope, Coleman sees the games as key markers looking ahead to the next qualifying campaign.

"Ireland are a good team, and well organised. You can see why they're there or thereabouts every major championship in terms of qualifying.

"We won't get a tougher test because we want to build from the back through the midfield and they wouldn't let us do that.

"We knew they wouldn't let us do it, we knew they'd press us high, so it was up to us to try and escape. The lads did their best. They did get tired in the second half but overall a great exercise for us. Games don't come much tougher than that."

"We deserved to win. We had three or four clear chances. The goalkeeper was fantastic.

"It was a friendly game and pre-season but at this moment, I am happy.

"I was worried that after the holiday maybe the team would not have the right mentality and I said to the players to remember what we did before. The performance was good enough."