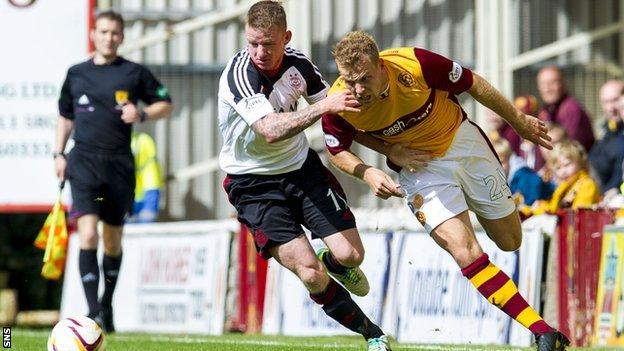 After both sides had won their opening Scottish Premiership match last weekend, the Dons this came from behind to win at Fir Park.

It was Aberdeen's first league win at Fir Park since 2008.

"Aberdeen are a good side and everyone will be full of them and that's fine," said the 'Well boss. "But we certainly won't be lying down, we'll be back."

The hosts were given the dream start when Estonia international Henri Anier ran through and coolly shot past goalkeeper Jamie Langfield.

But it was clear the visitors men were in the mood and created chance after chance.

Stephen McManus's foul on Jonny Hayes for the first spot-kick was undisputed, but the defender's tangling with Joe Shaughnessy and Reynolds at a corner for the subsequent penalty was less clear-cut.

"The referee's seen a pull but they're jockeying for positions," said McCall, who felt his side's midweek exploits in the Europa League made them leg-weary towards the end of the 90 minutes.

"If that's a penalty kick then there's six or seven penalties a game.

"The better team won on the day. We can't afford to give teams goals, especially Aberdeen who have threats all over the park.

"We got a little bit deflated and they got a lift from it."