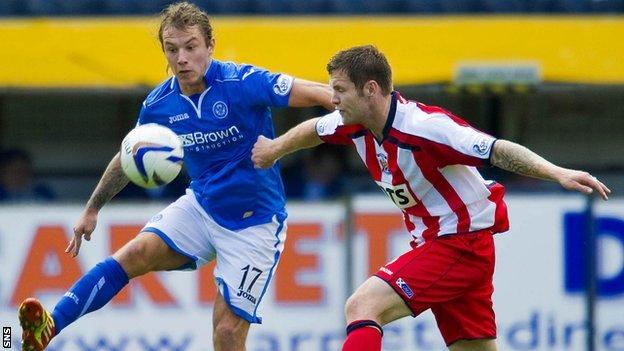 Tommy Wright has confirmed Peterborough's interest in Stevie May but insists St Johnstone's valuation of the player has not yet been met.

But Wright told BBC Scotland: "The offer is nowhere near £250,000. The offer is, I would say, quite insulting.

"Maybe Peterborough think they can come up across the border and get somebody on a steal. It isn't going to happen."

May featured in Sunday's 0-0 draw with Kilmarnock, having scored twice already for Saints this season.

"Everybody knows if the right offer's made, the club will obviously seriously consider that.

Meanwhile, Wright felt the result at Rugby Park was "a magnificent point" following Saints' Europa League exit at the hands of Minsk on Thursday.

"They keep battling and they get a point where maybe Kilmarnock probably thought they deserved all three," added Wright.

"But I think, in terms of the effort that we put in to try and stop them scoring, we deserve a point out of that.

"I'm delighted with the point."