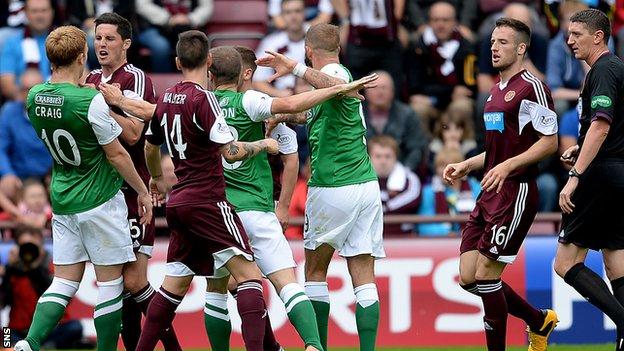 "The players need to respond," Stanton told BBC Scotland after a poor start to the season from his former team. "The manager is in a difficult position.

"Some of the Hibs players should be looking in mirrors and saying 'I'm not doing enough for this man'.

"And if they are not doing enough they are as well away because they are no good for the Hibs or the manager."

The Easter Road side have opened the Scottish Premiership campaign with back-to-back 1-0 defeats at home to Motherwell and away to Edinburgh rivals Hearts, following a painful record loss to Malmo in Europa League qualifying.

The manager is quite happy to carry the can but, for me, it is down to the 11 boys he picks

"I don't think there's a lot wrong," said Fenlon after Sunday's loss at Tynecastle, adding: "We need one result."

And Stanton, who played close to 400 games for Hibs, agrees that a win at home to Dundee United on Saturday could quickly relieve the pressure on the manager.

"It's an ideal opportunity for the players to give the manager a boost," explained Stanton, who won 16 caps for Scotland.

"If the players respond and get a result, it could all change."

However, Stanton, 68, wants to see a change in attitude from the men in green in white.

"If you were walking down the street and someone took your wallet out of your pocket, would you just keep walking or would you run after them and get your wallet back?

"Teams are coming to take points off you and it's up to you whether they take the points or not. You have to stand up to it."

Hibs have signed James Collins and Michael Nelson from England's League One, while Liam Craig, Owain Tudur Jones and Rowan Vine were all snapped up as free agents after impressing for top flight rivals last season.

However, Stanton has not been impressed with the club's recruitment process in recent seasons.

He said: "The times Hibs have changed their personnel, it's been like-for-like with the players going and the new ones coming in.

"It's a certain type of player that's coming that I don't think are good enough for the Hibs.

"Hibs are a club that should be further up the league and they haven't been up there for quite a long time now."

Experienced midfielder Kevin Thomson, back at the club after spells with Rangers and Middlesbrough, also said the players need to take responsibility for a bad run of results.

"The manager is a good man and has brought in some good players. We could have been sitting here with a good start to the season but unfortunately we are not.

"The fans pay their money and are entitled to their opinion - some of them think I'm a good player and some think I'm rubbish.

"The appointment of Jimmy Nicholl [assistant manager] has been fantastic. He has been a breath of fresh air since he came in, but it's a results business and as players we have to stick together and get results.