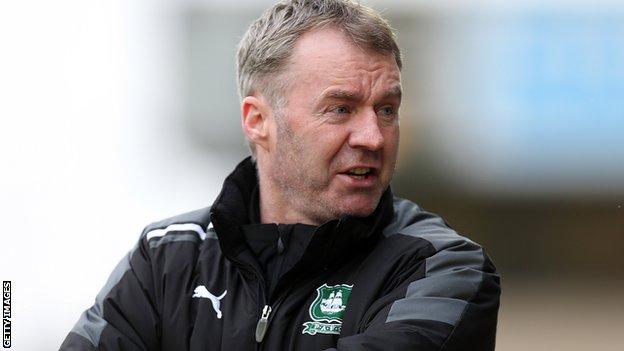 Plymouth Argyle boss John Sheridan said he and his team had to take criticism "on the chin" after a third straight defeat of the season.

Argyle lost 2-0 to Fleetwood on Saturday and Sheridan admitted the display was not what he expected.

"We've got to take it - the league games we've played just haven't been good enough," he told BBC Radio Devon.

"We weren't switched on. I don't have a go at my players in the press, I have a go at them in the dressing room."

He added: "They're the ones who'll get us out of it. I've got to keep them on my side but they know my feelings."

Sheridan exempted full-back Durrell Berry from the criticism, and suggested the 21-year-old's performances were the example that the rest of his players needed to follow.

"I don't normally pick players out but I will do - he's playing at a level where I expect the other players to be."

Two goals in the space of two minutes from Fleetwood's lively striker David Ball cost Argyle dear at Home Park, but Sheridan said his players had not shown enough intensity to get back into the game.

"I thought we started really well. We were on the front foot and we got at them - but the killer was the two goals," he said.

"They came very quickly and we didn't pick up after the goals. Full credit to Fleetwood, they kept catching us on the break.

"We totally switched off. The goals were soft goals - we gave them too much time and space.

"I'm the manager and it's hard sometimes to find things to say as to the reason why. I can look at myself - did I pick the right team?

"It's the same team that everyone says played so well against Birmingham in the League Cup."