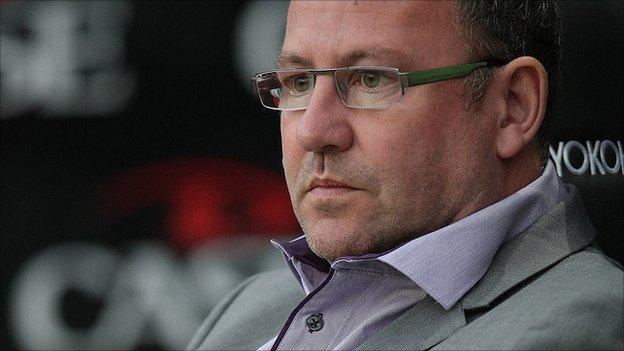 The Cumbrians fielded a side with an average age of 23, with Paul Thirlwell the only over-30s player, at 34.

"We have got too many lads learning the trade and you get found out," Abbott told BBC Radio Cumbria.

"League One is not a nice place to try to do it. It is a tough league - it is where I spent a lot of my career."

He added: "There were too many of our senior players that we have got who let us and themselves down. We have all let the club down."

The defeat leaves United at the bottom end of the table, propped up only by a Coventry City side whose 10-point deduction has been whittled down to minus-seven.

Nine league goals conceded are another concern, with just one in reply.

Meanwhile, Abbott was unable to call on suspended striker Lee Miller and the injured pair of defender Sean O'Hanlon and winger Matty Robson for the match, and the trio could be absent for Saturday's visit of Coventry to Brunton Park.

"Lee won't be [available], Matty Robson probably won't be, the only one we have got a hope for Sean O'Hanlon," said Abbott.

"Sean has been missing for three or four weeks, it is whether we can get him fit enough to be able to start a game.

"We certainly need his power and his nous, his experience and his determination, because we looked very fragile there."