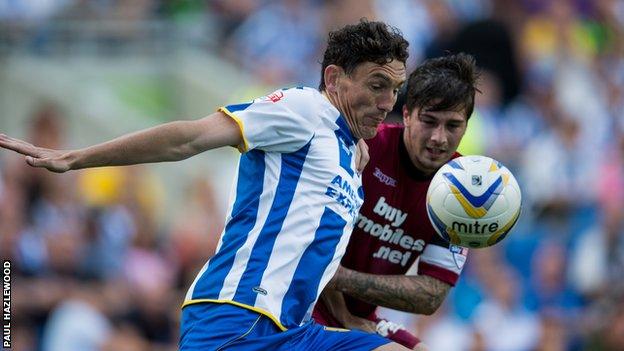 Keith Andrews says Bolton's decision to send him on a season-long loan to Brighton & Hove Albion was a surprise.

The 32-year-old midfielder joined the Seagulls on Saturday and made his debut in the 2-1 defeat by Derby County.

He told BBC Sussex: "It came as a bit of a bolt out of the blue as I featured heavily in pre-season. It's all been a little bit strange.

"It was a decision they made and they obviously made it very clear I wasn't wanted at the football club."

After featuring in both of Bolton's opening fixtures of the season, Andrews became aware of Brighton's interest on Thursday afternoon.

"From there it happened very quickly and I arrived in Brighton on Friday evening," the Republic of Ireland international added.

"Nobody really had the decency to even phone me as I was leaving.

"I think I deserve a little bit more respect than that, I suppose. I always felt I'd done things well at that club, been very professional and treated people like I like to be treated.

"To end on that note was a bit sour but you can't be surprised by anything in football."

The former Wolves and Blackburn man is aiming to put his sudden exit from the Reebok Stadium behind him.

"I've been around that long that it doesn't really affect me," he said. "I've dusted myself down and am very excited to be at Brighton.

"If it wasn't the right move, I certainly wouldn't have gone and I didn't feel any pressure to leave.

"It was a move that genuinely excited me. To come to a club that plays in the fashion and style that Brighton do was something that really appealed to me.

"I have still got a huge appetite for the game and I feel I can have a big impact here.

"I have come into a squad that has a wealth of experience and ability that will make me be the player I know I can be."