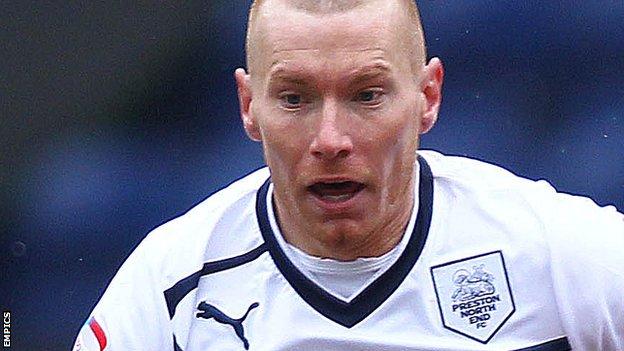 Preston North End will be without Jack King for at least two months because of a stress fracture in his foot.

Manager Simon Grayson says the versatile 27-year-old will be a big loss to his squad at Deepdale.

"He's played right-back, centre-midfield and centre-forward in pre-season, and he did very well last year for us," he told BBC Radio Lancashire.

"We're all gutted for Jack because he's a great lad. Somebody else will have to come to the party."

King has primarily been used as a striker during his time with North End, and with fellow front men Iain Hume and Stuart Beavon struggling with injuries, King's absence has left Grayson slightly short of attacking options.

Hume and Beavon were both missing for the although the Preston boss expects the pair to return against MK Dons on 17 August.

"Both were close to playing [at Rotherham] but there was no point in risking them," added Grayson, whose side have made an unbeaten start to the League One season, having

"Iain's groin was a bit tight and Stuart tweaked his knee again in Thursday.

"Hopefully next week we'll have them both available and that will give us a few more options. Jack is the only major concern that we've got now."