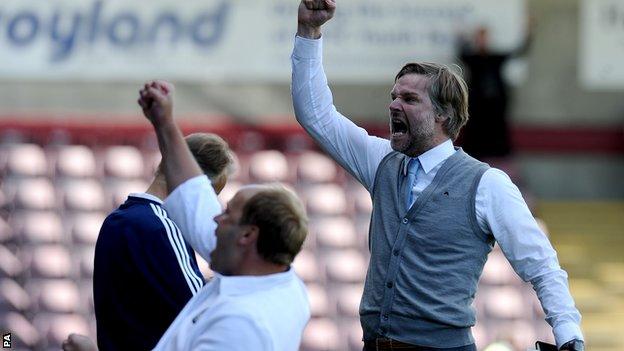 Coventry boss Steven Pressley praised his side for the resolve they showed in their 5-4 win against Bristol City - their first 'home' game at Northampton.

The Sky Blues were pegged back to level terms, having led 3-0 at the break.

After Callum Wilson and Marvin Elliott added another for either side, Billy Daniels stole the win for Coventry.

"The players deserve much credit. When you're 3-0 up and you're pegged back, it's very easy to go under," Pressley told BBC Coventry & Warwickshire.

"They didn't, they continued to show that spirit and unity that I think is so evident at our club at this time."

Daniels' dramatic 87th-minute winner concluded an enthralling match, and ensured that Coventry picked up their first points of the season, and moved onto -7, having begun the season with a 10-point deduction.

I've said this on numerous occasions, it's not the ideal situation and I have total sympathy for our supporters

The Football League imposed the sanction as one of the club's subsidiary's, Coventry City FC Ltd, which has been in administration since March, is facing liquidation following a rent row with Arena Coventry Limited, which runs the Ricoh Arena.

But despite the off-field uncertainty, former Scotland defender Pressley said he was proud of how his players handled the match.

"I thought, especially in the first half, we were outstanding with some of the level of football and the intensity of our pressing game," he said.

"I actually didn't think we played badly in the second half. We conceded a couple of disappointing goals but they probably scored from the four opportunities that they had."

Sunday's dramatic affair marked the start of the Sky Blues' three-year exile in Northampton, 34 miles away from the Ricoh Arena.

The match was watched by only 2,204 people, in contrast with over 5,000 who witnessed a match between Coventry City Legends and Midlands All Stars taking place at the same time at the Ricoh Arena.

Pressley admitted the situation was not desirable, but that he and his players would continue to fight.

"I've said this on numerous occasions, it's not the ideal situation and I have total sympathy for our supporters," he said.

"This is a game they would love to have come and seen, but we understand how they feel towards this.

"All my players and I can do is continue to provide that level of performance, and hopefully make our fans proud again."