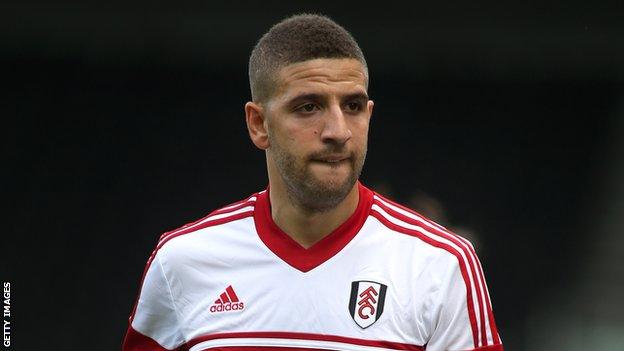 Fulham midfielder Adel Taarabt could prove to be a key signing for the club if he allies hard work to his ability, according in captain Brede Hangeland.

The 24-year-old Morocco international has joined on a season-long loan from Championship side QPR.

Hangeland told BBC London 94.9: "I'm very excited to have him on board and it was a welcome surprise for us.

"It will be down to him to prove he can be consistent and work hard. His talent is unquestionable."

Can we play you every week?

Of Adel Taarabt's five Premier League goals last season, three came against Fulham, including both in QPR's 2-1 win at Loftus Road in December

He added: "He caused us a lot of problems playing for QPR last season so I am happy he is on our team now."

Fulham lost 2-1 to Italian Serie A side Parma on Saturday in what was their final pre-season friendly.

The centre-back is wary the Cottagers will need to improve ahead of their first match of the Premier League season, away to Sunderland on Saturday.

"I didn't think we played particularly well, especially in the second half," the Norway international, 32, said.

"In the first half we showed the type of football we are capable of playing and that's what we need to try and do a bit more often.

"It's fair to say in the summer you do a lot of hard work and run around with one purpose - to get to the first game of the season.

"Now we are quite close so everybody will be looking forward to it and ready to go."