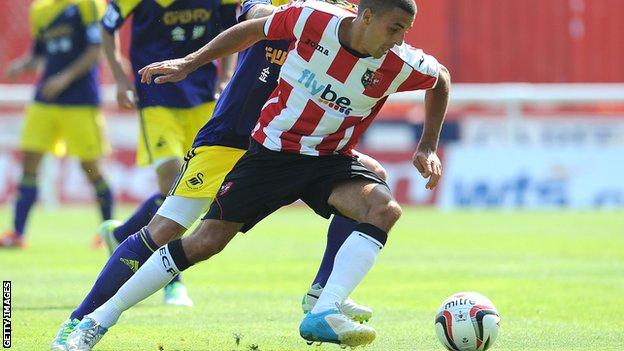 Exeter City manager Paul Tisdale says his side need to learn to make better decisions and show more patience when in possession.

Tisdale said his players, who drew 0-0 with Mansfield on Saturday, could not be faulted for effort but simply needed more composure on the ball.

"I don't think it's down to sharpness - it's decision-making and patience," he told BBC Radio Devon.

"It was an energetic game and we could have made more considered decisions."

Tisdale added: "If we'd done 10% better - and I don't mean in terms of energy or commitment - then we'd have had more of a flow to out play.

"At times another three or four passes would have opened them up and we forced the ball too often and gave it away. We were just too keen to play it forward and force it."

The long-serving Grecians boss said the solid start to the League Two season was a comfort, but could not disguise his slight frustration at missing an opportunity to follow up the opening weekend's win over Bristol Rovers with another victory.

"I think we'll go away thinking it's a good point, a clean sheet away from home and so on - I'm sure we can spin the positives in our mind - but we'll be a bit disappointed really," said Tisdale.

"There were three points there if we'd played better. I don't think we deserved it on the match - they had pressure, we had good chances too and each side will think back to a couple of chances missed.

"It just didn't quite happen for us."