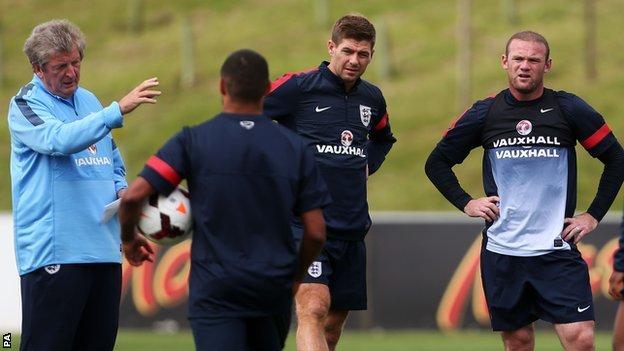 England manager Roy Hodgson expects striker Wayne Rooney to put his club troubles aside when he features in Wednesday's friendly against Scotland.

There has been huge speculation about Rooney's Manchester United future.

The 27-year-old, who wants to leave Old Trafford and has been the subject of two bids from Chelsea, has also missed most of pre-season with injury.

"His mind is fine," said Hodgson. "He can compartmentalise club and country, which I expect from all players."

Hodgson added: "I expect players, when they come here, to be fully focused on playing for England.

"Players cannot bring their club problems to England. If there were any problems with England, they cannot take them back to their clubs. It is two separate identities."

Rooney, who has been suffering with hamstring and shoulder injuries, has played just one pre-season game - a behind-closed-doors encounter against Real Betis - for Manchester United in the build-up to the 2013-14 season.

The forward, who has 83 caps for England and has scored 36 goals, missed his club's Community Shield win over Wigan at Wembley on Sunday, although he took a full part in training with his international team-mates on Monday.

When asked if Rooney was fit enough to start against Scotland, Hodgson said: "I think so.

"We will see on Tuesday how he reacts to Monday's session because it might have been a bit more intense than the work he has been able to do while recovering from injury.

"If there are no problems and he comes through the training session well, we will speak to him and make a decision.

"Whether he starts or comes on the field at some later stage is of less importance to me than the fact he is there, ready to play football for us."

England face Moldova and Ukraine in crucial World Cup qualifying matches next month, with Hodgson's side second in their group - two points behind leaders Montenegro with a game in hand.

Montenegro and Poland then await England in October as qualifying for next year's World Cup in Brazil reaches a climax.

Hodgson expects a tough game against Scotland at Wembley.

"What will interest me more than rivalry is our performance," he said. "This will be, if you like, a litmus paper of how we are going to go."