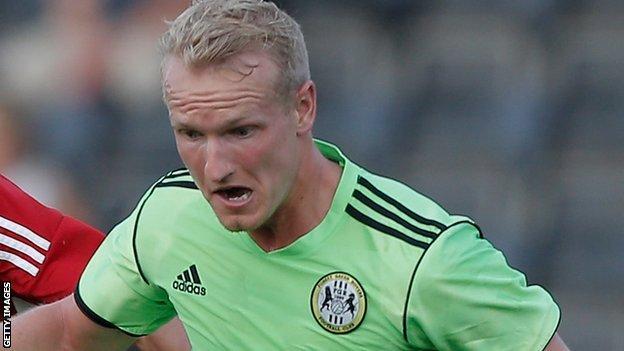 Forest Green striker Marcus Kelly says his hat-trick in the 8-0 win against Hyde was the "perfect start" to his career at the New Lawn.

Kelly joined Rovers in the summer after turning down a new deal with Conference Premier rivals Tamworth.

And in his first competitive game for the club, the 27-year-old forward was among the five scorers in Saturday's emphatic victory.

"It was the perfect start, wasn't it," he told BBC Gloucestershire.

"We wanted two things: a win and a good performance with it. We got both which is really good."

On the first day of the new Conference season, the former Oxford and Rushden & Diamonds striker opened the scoring against 10-man Hyde - who had Josh Brizell sent off after 19 minutes - in the 25th minute.

Kelly added a second four minutes later, while Danny Wright and James Norwood scored to make it 4-0 at half-time.

Taylor netted his second before fellow debutant Matthew Barnes-Homer made it 7-0 and Kelly completed his hat-trick on 76 minutes.

"Getting the early goal was vital," Kelly added. "It made it a little easier with the sending off but the lads played really well.

"Even without the sending off I think we would have got the result."

Manager Dave Hockaday added: "To do what they've done is not easy. We've played with 10 men and won games.

"The quality of finishing, and the fact there could have been more goals, is a testament to how we went about it.

"I'm really proud of the professionalism."