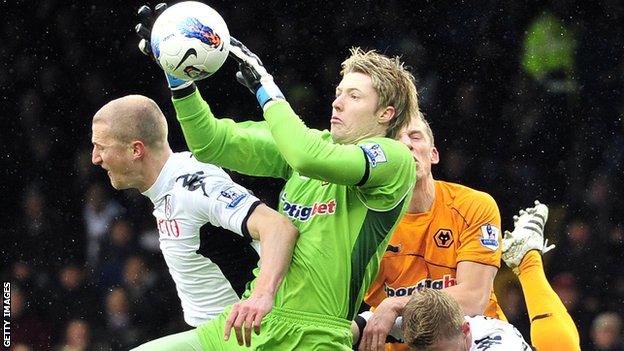 The 26-year-old has not made a competitive appearance since April 2012 because of a serious knee injury.

He returned to action during pre-season and Wolves want to send him on loan for an initial month to get match practice.

Yeovil have been forced to enter the loan market after first-choice keeper Marek Stech broke his hand during Saturday's 1-0 defeat by Birmingham.

The deal will go through once Hennessey returns from international duty following Wednesday's friendly against the Republic of Ireland in Cardiff.

Hennessey did not concede a goal in his first nine senior matches while on loan at Stockport in 2007, setting a new Football League record for consecutive clean sheets.

Goalkeeping coach Gareth Stewart, 33, is used as the Glovers' regular back-up to Stech and played for 82 minutes against the Blues.

"We had a few keepers make themselves known to us when they realised there was a Championship spot going," Yeovil manager Gary Johnson told BBC Points West.

"We chose Wayne out of a very good group. It suits everyone as Wolves want him to play first-team games and we need a first-team keeper."

Hennessey has played 166 games for Wolves after coming through their academy and has previously had loan spells at Stockport and Bristol City - where he worked under then manager Johnson.

Capped 38 times by Wales, Hennessey first picked up a cruciate ligament injury in his knee during Wolves' Premier League game with Sunderland and was expected to be out for six months.

He returned to training only to damage the knee again and underwent a second operation to fix the problem.

Since his last appearance, Wolves have been relegated to League One and Carl Ikeme has become their first choice in goal.

Wolves head coach Kenny Jackett told the club website: "It will be a good chance for Wayne to build up his match fitness and is also in the best interests of the club to see him enjoy some regular first-team action."