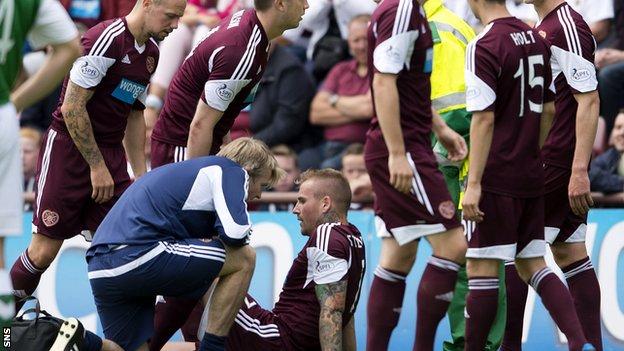 Hearts midfielder Ryan Stevenson will be sidelined for at least two months because of a knee injury.

The 28-year-old sustained medial ligament damage during the first half of Sunday's Edinburgh derby win at Tynecastle.

"Ryan looks like being out for at least eight weeks," manager Gary Locke told Hearts News.

"That's a bit of a blow for us to be honest as he's one of our most experienced players."

Locke conceded it was a bitter blow to lose Stevenson after his side earned victory in the derby.

"He'll be in a brace for five-and-a-half weeks but the good news is he hasn't damaged his cruciate, so from that perspective it could have been worse," added the Hearts boss.

"Nevertheless, it is still really disappointing given the depth of squad we have at our disposal at the moment and our focus will be on getting him back fit as soon as we can."