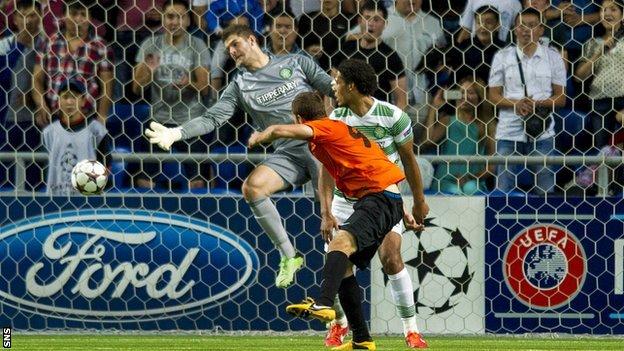 The Kazakh side gained an early lead through Andrei Finonchenko's close-range finish.

Kris Commons struck the bar and Georgios Samaras headed wide as the visitors tried to force a leveller.

Celtic will seek to overturn their deficit in next Wednesday's return meeting in Glasgow.

The first-leg fixture took place at the 30,000-seat Astana Arena in Kazakhstan's capital instead of Shakhter's smaller capacity ground in Karagandy.

And, like Celtic's previous two qualifying rounds, the Scottish champions were playing their away leg on an artificial surface.

Neil Lennon's side had secured aggregate wins against Cliftonville and Elfsborg without conceding a goal but a new defensive line-up looked vulnerable as Shakhter took the lead.

Nikola Vasiljevic headed on Gediminas Vicius' long throw-in and Finonchenko slid in to tuck the ball past goalkeeper Fraser Forster.

Earlier, Virgil van Dijk had twice threatened to mark his first Celtic start with a goal.

Aleksandr Simcevic cleared off the line after the Dutchman outmuscled keeper Aleksandr Mokin at a corner before the 22-year-old had a header saved.

And the home side had another narrow escape when Commons' superbly struck shot hit the underside of the bar and bounced back into play off the goal-line, with the officials deeming the ball had not gone in.

Izaguirre may have done better after latching on to Commons' diagonal ball early in the second half, the full-back scooping his shot over from near the penalty spot.

Throw-ins from Vicius continued to cause Celtic problems and Shakhter's confidence in open play was evident as Khizhnichenko tested Forster at the end of a sweeping move.

And, after Mokin did well to block Forrest's header from an inviting Izaguirre cross, Khizhnichenko rose to direct Vicius' wayward shot past Forster.

Celtic's late push for an away goal proved fruitless with Mulgrew unable to keep his header down in injury time.

Shakhter will now travel to Celtic Park hopeful of reaching the group stages of the competition for the first time, while Lennon's men will drop into the Europa League if they cannot recover the deficit.