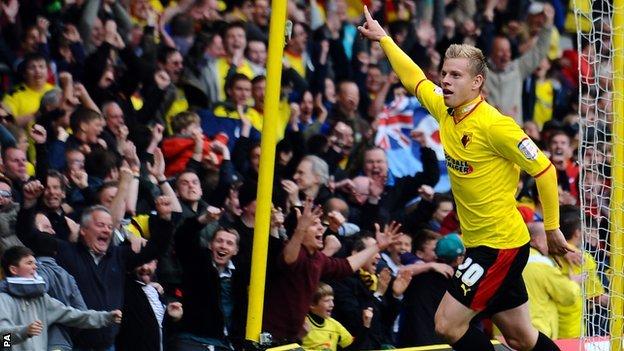 The 21-year-old scored 20 league goals while on loan at Watford last season to help them to third in the Championship and reach the play-off final.

"He had a really good year with Watford and we believe he's got the qualities to score goals at a higher level," said Albion head coach Steve Clarke.

Though Vydra would suffer defeat with Watford in the play-off final, his two goals in the semi-final second leg against Leicester helped them to a 3-2 aggregate win.

"We had Matej watched throughout last season," added Clarke. "As well as some excellent scouting reports, we had some really good feedback from within Watford about Matej as both a player and person.

"I've said previously we're a bit light in the forward areas and Matej will increase competition for places.

"He's another good quality striker to add to the other three senior forwards we have here."

Vydra, who has started two league games in Serie A for his parent club, will be tasked with replacing some of the 17 league goals scored by Romelu Lukaku, 20, who has returned to Chelsea after his loan spell at The Hawthorns expired at the end of last season.