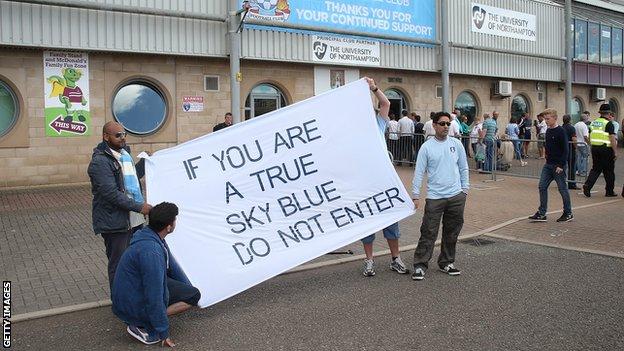 Anniversaries are supposed to be a chance to celebrate and reminisce over past glories.

But, as Coventry City marked 130 years since their formation this week, they did so under a cloud of uncertainty.

A drawn-out stadium row, divisions within their fanbase and a temporary move to a ground 34 miles away from the city have left the Sky Blues in possibly their worst state since the club was founded by employees of the Singer cycle factory in 1883.

Their situation became so critical that Football League chairman Greg Clarke admitted at one point he thought the club would fold.

The club currently sit rock-bottom of League One having suffered a 10-point deduction for the second successive season, after a subsidiary of the club was left on the brink of liquidation the day before the season began.

That was the culmination of a long-running row between the club's owners and the operators of the Ricoh Arena, which has seen Coventry leave their home since 2005 and the city for the first time ever to groundshare at Northampton's Sixfields Stadium until the 2015-16 season as they ponder their next course of action.

Coventry chief executive Tim Fisher believes the move had to be made to keep the Sky Blues afloat.

"Of course it [Coventry leaving the city] saddens me," he admitted to BBC Coventry & Warwickshire. "But we have to make sure that the club continues.

"And that's the responsibility that we took very seriously, and hence that's why the owners committed [to the groundshare] for a number of years so we can make sure we can re-grow the business."

The whole saga began back in April last year, when, citing the financial constraints of relegation to League One, the Sky Blues owners Sisu stopped paying their Ricoh Arena landlords, Arena Coventry Limited, who consist of Coventry City Council and the Alan Higgs Trust Centre, £100,000 a month in rent, believing it was too high.

In December, with the rent situation still unresolved, the Sky Blues began to scour the country for other grounds to play at, with provisional talks held over playing at Hinckley United's 4,329-capacity Greene King Stadium.

From then on, the situation began to escalate at a frantic pace before a non-operating part of the club, Coventry City FC Ltd, was put into administration.

The Sky Blues were subsequently deducted 10 points by the Football League and moved all staff and club shop stock from the Ricoh Arena to their training ground, appearing to try to cut ties with their home of eight years.

"Turbulent, traumatic and to some tiresome, that's a brief assessment of the long-running saga at Coventry City.

"At the moment there seems to be a "ceasefire" in the war of words in the row which has been going on between the club's owners and the company that runs the Ricoh Arena.

"Thousands of City supporters are against the plan to play home games in Northampton while a new stadium is built in the "Coventry area". Protests have taken the form of petitions, marches and a tie a Sky Blue ribbon campaign.

"Former players have lined up to voice their concerns over their club with Cyrille Regis, Noel Whelan and Darren Huckerby being the latest.

"As this drags on, it's the fans who are being let down by all parties, some say they are witnessing the slow death of a club they love."

They struck a deal to finish the season at the Ricoh but shortly after were taken over by the Otium Entertainment Group, founded by three former Coventry directors who all have connections with Sisu, and agreed a three-year groundshare at Northampton following their row with ACL.

That decision has provoked almost unanimous anger from the club's fanbase towards both the owners and the Football League for allowing it.

But Clarke said they had to allow the Sky Blues to play at Sixfields, as well as transfer their share in the League to Otium, to "keep the club alive".

The feeling towards the entire situation was so unsavoury that on the same day as Coventry were due to play their first league match at Northampton, fans used a charity game between Coventry City Legends and Midlands All Stars at the Ricoh Arena to protest against the move, where chants against the club's owners could be heard.

One of the fans who attended that game, Brian Tredwell from London, actually travelled to the Ricoh via Sixfields to pick up a programme, but said he could not face going into the ground because of the saga.

"It's an absolute joke, it's a disgrace and they should be ashamed of themselves," he said. "I came to get a programme to tell the club I still care about them, but I will not go in there purely out of principle.

"The ones that did should take a real long look at themselves. What are they doing? Let's stand together and not go there."

This was, however, not a view held by last season's League One fan of the year Pat Raybold.

She was one of just 2,204 supporters to witness their breathless 5-4 victory over Bristol City - in contrast to the charity game which had over 5,000 attendees.

"It [coming to Sixfields] was never in doubt," she commented. "I've come to support my team, it's not their fault we were there. I don't want it to be there, I want it to be at our normal home ground but I cannot envisage not supporting my team.

"I think that's the biggest shame of the whole situation is that fans are turning on fans, when in the end we all want the same thing. I respect every fan's decision, I just wish some would respect mine."

No matter which side of the fence Coventry supporters are on, there is an overwhelming feeling that the club should be back in the city they take their name from.

"I think for the fans, club, manager and everyone concerned, we just want it resolved and put Coventry back where it should be, and give the pride back to the fans of this city," he said.

One obvious option would be to return to the Ricoh Arena, whose operators, despite the current row, wish to have the club continue to play at the ground.

However, following ACL's rejection of a Company Voluntary Arrangement, which could have seen CCFC Ltd come out of administration but instead left it facing liquidation, Fisher has ruled out a return to the 32,609-seater stadium, despite being offered a reduced rate of rent.

Instead of going back to the ready-made home, the club are now looking to build a stadium of their own just outside the city limits, to avoid working with Coventry City Council.

"We've got three [potential stadium] sites, two sites I'm particularly excited about," Fisher said. "The initial discussions with those councils have been very positive and they look forward to investment.

"There is no impediment to building a stadium, the only issue that we have is that we won't come within the jurisdiction of Coventry City Council."

If Fisher's plans come to fruition, the club will be back near the city they have called home for the last 130 years, rather than the limbo they currently find themselves in.

However, what remains to be seen is whether the fans will return in their numbers to support the club, or if the damage done by this saga is irreversible.