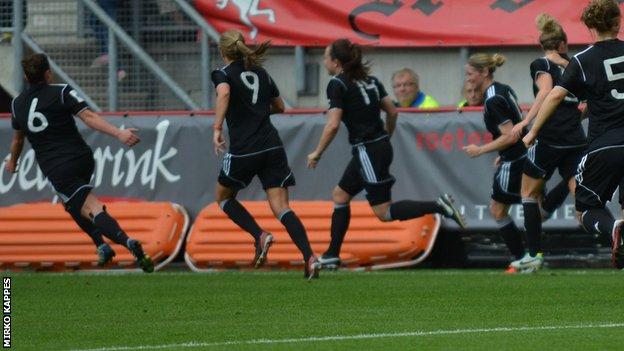 Glasgow City qualified for the Women's Champions League round of 32 for the third year running after a narrow win over hosts Twente in the Netherlands.

Rachel Corsie opened the scoring for the Scottish champions after 39 minutes of the Group 8 decider.

And substitute Sarah Crilly fired the second in stoppage time.

It means that City top the group with maximum points without the loss of a goal after earlier wins over Croats and Maltese .

But Northern Irish champions Crusaders Strikers and Welsh representatives Cardiff City both ended their campaigns with defeats and at the bottom of their qualifying sections.

However, goals from Ireland strikers Noelle Murray and Mary Waldron after 29 and 58 minutes ensured their side recorded their first points of a group won by MTK Hungaria after their 1-0 victory over Ukrainian champions Kharkiv.

Cardiff finished their campaign without scoring and at the bottom of Group 1 after losing 1-0 to Konak Belediyespor, the Turks qualifying as section winners.

The Welsh lost their opener 3-0 to hosts SFK 2000 Sarajevo in Bosnia-Hercegovena and then 2-0 to NSA Sofia of Bulgaria.

Glasgow, Scottish champions for the last six seasons, battled to victory against Twente in front of 2,750 fans, to the delight of head coach Eddie Wolecki Black.

"We knew this was going to be a very tough campaign and I think we showed a real Scottish determination to get the right result," he said.

"I cannot recall them being a threat on Lee Alexander's goal and I thought tactically the team performed magnificently."

Sari van Veenendaal turned an early shot from Denise O'Sullivan wide for a corner before Alexander denied defender Kirsten Bakker at the other end.

Midfielder Sherida Spitse sent an effort wide and Dutch international colleague Anouk Dekker was next to test the Glasgow goalkeeper, but the striker's effort was easily held.

However, it was captain Corsie who put Glasgow ahead when the Scotland defender headed in from a Leanne Ross free-kick.

Van Veenendaal produced another fine save to deny Suzanne Lappin as the first half ended with Glasgow 1-0 ahead.

Spitse missed the target with a couple of long-range efforts shortly after the break before van Veenendaal denied Joanne Love after the midfielder's fine run from the halfway line.

A last-ditch tackle from Corsie denied Dekker, while Spitse sent another effort just over the crossbar from the edge of the penalty box.

Glasgow had chances of their own and Nicola Docherty fired wide for Glasgow, while Lappin heade wide.

The visitors settled the tie when O'Sullivan broke through and, although she was denied by the goalkeeper, Crilly followed up on the rebound.

There was still time for Van Veenendaal to deny Ruesha Littlejohn and Alexander prevented Maayke Heuver grabbing a late consolation.

It means that Glasgow go through as one of eight group winners, while Twente must wait to see if they are one of the two best runners-up to qualify.