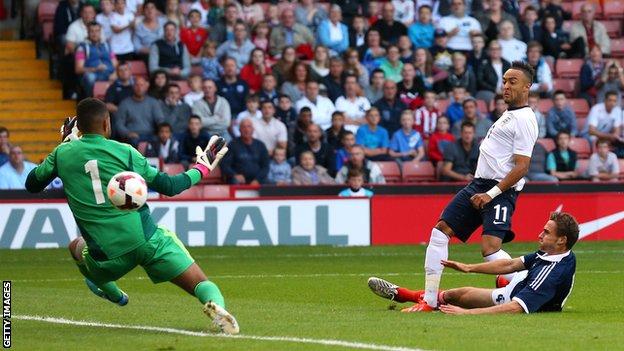 England Under-21s thrashed a poor Scotland side 6-0 at Bramall Lane with senior manager Roy Hodgson in temporary charge of the hosts.

Nathan Redmond opened the scoring after three minutes before Raheem Sterling struck a second before the break.

A bizarre error from Scotland goalkeeper Jordan Archer allowed Connor Wickham the chance to lob him before Ross Barkley fired in the fourth.

As the Football Association continues the search for a replacement for Stuart Pearce, whose contract was not extended following England's failure to qualify from the group stages of this summer's European Under-21 Championship, Hodgson oversaw the young Three Lions.

And the England senior boss will have been pleased with what he witnessed as new Norwich City signing Redmond got them off to a flying start after being played through.

Liverpool winger Sterling looked to be offside when Sunderland striker Wickham flicked the ball on seven minutes before half-time, but the assistant referee's flag stayed down and he finished off the move.

Archer then mis-hit a kick out of his hands after the break and Wickham cleverly turned the ball past the Tottenham goalkeeper before Everton's Barkley capitalised on hesitant play from the visitors moments later to create the opening for the fourth.

Shelvey, who joined Swansea City this summer, thumped in the fifth from distance and then a superb run from Redmond was followed up by a neat pullback for Tottenham midfielder Carroll who smashed in the sixth to heap more misery on Billy Stark's Scotland side.

"They really did take their chances with both hands," said Hodgson.

"A lot of those players would certainly not be out of place in the senior team - albeit, I must say, from working with the seniors for the last couple of days, I have been pretty impressed with the quality of the technique and the desire and the ambition we have there."

Stark admitted: "It was a chastening experience.

"I have been in football long enough to know that, however you approach a game, you can never be absolutely sure. But I never saw that coming."