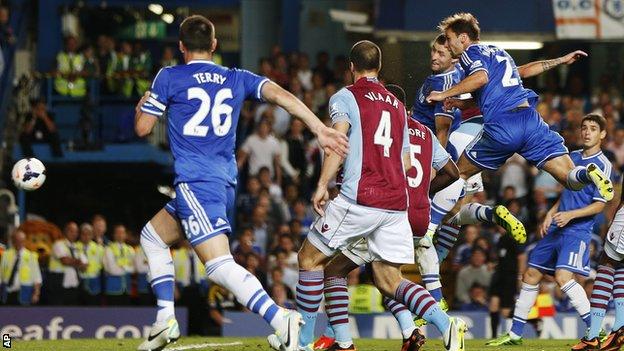 Branislav Ivanovic powered in a second-half header as Chelsea won a feisty game against Aston Villa.

Chelsea went ahead after Eden Hazard's shot was unluckily pushed into his own goal by Antonio Luna, before Christian Benteke struck a precise equaliser.

Ivanovic was left unmarked to convert a Frank Lampard free-kick, but only after Villa felt the defender should have been sent off for an elbow on Benteke.

Villa had a late penalty appeal for a handball by John Terry turned down.

Jose Mourinho has never lost a Premier League match at Stamford Bridge, winning 48 and drawing 14 of his 62 games in charge at the ground across his two periods in charge

There were heated scenes on the touchline between managers Jose Mourinho and Paul Lambert, as the Villa boss argued Ivanovic should have received more than a booking for the incident with Benteke.

The Scot was then further infuriated by the failure to award the injury-time penalty.

Lambert's inexperienced side were beaten 8-0 by the hosts in December, with six survivors remaining in the Villa starting line-up from that crushing defeat.

The visitors have progressed steadily from that low point, however, with their improvement on display in last Saturday's impressive 3-1 opening weekend victory at Arsenal.

Buoyed by Mourinho's winning return as manager against Hull, there was an equally positive mood among a vocal home support at a balmy Stamford Bridge.

Hazard and Oscar combined to force the early breakthrough as the latter's perfectly weighted through-ball sent his colleague clear inside the penalty box.

The Belgian's curled effort was palmed away by the stretching Brad Guzan, but he could only force the ball into the chest of the helpless Luna from point-blank range.

Despite the early setback, Villa did not resemble the flaky team that conceded 69 top-flight goals last team, remaining compact as they fought to prevent a repeat of Chelsea's rampant first-half display against Hull.

Indeed, they could have levelled the game only for Andreas Weimann to make poor contact with Luna's centre after he had intelligently peeled away from marker Ashley Cole.

Chelsea continued to dominate possession without ever threatening, and this lack of penetration was to be punished seconds before the half-time whistle.

Gabriel Agbonlahor burned off the sluggish Ivanovic out wide, with Benteke in position to expertly place an equaliser off Petr Cech's near post after he was given a yard of space by Chelsea captain Terry.

The Belgium international's effort was his 17th top-flight strike in 2013, putting him three goals ahead of second-placed Robin van Persie of Manchester United.

After the break Weimann forced an excellent stop from Cech after being picked out by Benteke's delightful chipped pass before Agbonlahor curled narrowly over after a swift counter-attack.

Chelsea were stung into life by those chances, and went in front through Ivanovic's header minutes after he was booked for clashing with Benteke.

Buoyed by the youth and pace of substitutes Andre Schurrle and Romelu Lukaku, Chelsea - who play Manchester United and Bayern Munich in their next games - remained on the front foot in the final stages.

But there was still time for referee Kevin Friend to turn away Villa shouts for a spot-kick at the death when Terry appeared to block Agbonlahor's header with his arm.