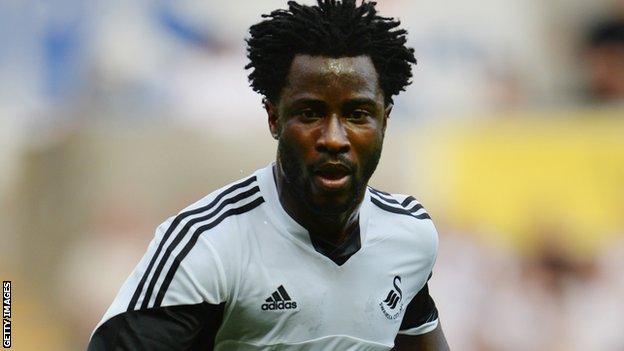 Something has changed in south west Wales. There's real expectation Swansea City will improve yet again this season - a stark contrast to the start of their two previous Premier League campaigns when some pundits predicted they would not flourish in the top-flight.

But a top half finish of ninth place last season was coupled with their first major trophy win, a 5-0 thrashing of Bradford City at Wembley, a result which returned the club to European competition for the first time in two decades.

Early indications show the Swans have taken to the Europa League as comfortably as they have in the Premier League.

A summer of celebration, then, at the Liberty Stadium? Not quite. Success inevitably means the vultures circle and manager Michael Laudrup, one of the world's greatest players, soon became the subject of intense speculation with European giants like Monaco and Paris St Germain linked to the Danish star.

Having lost Brendan Rodgers in 2012; Paolo Sousa in 2010 and Roberto Martinez in 2009; speculation about movement of staff is nothing new for the club's directors. But what they perhaps weren't prepared for was the role Laudrup's agent, Bayrum Tutumlu, would play.

More quotes of him, rather than Laudrup, appeared in the UK media where he questioned the transfer budget on offer to his client. As a result the dispute between the board and Tutumlu became more public and bitter and eventually the club's hierarchy cut ties with the agent altogether amid fears that Laudrup could walk away after just one season.

But, much to the relief of the fans, Laudrup is still there. No one really knows how close he was to leaving apart from the man himself and chairman Huw Jenkins, but the Dane insists that is all in the past, "I have repeated it so many times in the last three months. My intention is to stay,"

And in that sense he and the board have been as good as their words.

An impressive influx of players has seen the arrival of England midfielder Jonjo Shelvey from Liverpool, Spaniards Jose Canas,Jordi Amat and Alejandro Pozuelo and the most eye catching of all, Ivory Coast striker Wilfried Bony for a club record £12 million from Dutch side Vitesse Arnhem.

More importantly, perhaps, is that (at the time of writing) they haven't lost any of their major players from the last campaign.

Ashley Williams, their rock in defence, takes over as full time captain on the field as he does with Wales. He'll play in front of the impressive Michel Vorm in goal, while Chico Flores and Angel Rangel make up the Spanish contingent at the back along with Ben Davies - the young revelation of last season called up from the youth team

Netherlands midfielder Jonathan De Guzman returns for another season on loan to take his place alongside Wayne Routledge, Nathan Dyer and Pablo Hernandez. The presence of veteran Leon Britton is a touching reminder of the journey from League Two to Premier in the space of a decade.

Then there is Michu. The 22 goal, £2 million bargain of last season is no longer a surprise package but his quality in front of goal will be key to Swansea's campaign. And with Bony in the team now as the main striker, Michu can now play in his preferred, deeper, position.

"I scored more goals when I played behind a striker last season", says the Spaniard

"I like that position because I can move around and the centre-backs are looking for the striker and not me. I can arrive late from the second line and score goals.

"It was important for Swansea to bring in a top striker and Bony is a super player. We're pleased he has joined and he will try to help us."

Matches to look out for

Their season opener is against the champions.

David Moyes arrives at the Liberty for his first game as Manchester United manager on 17 August and those, along with Chelsea, Arsenal and Manchester City are the games to look forward to as ever. But you'd forgive fans for anticipating one other contest more.

Cardiff City's arrival in the Premier League sees the first top flight Welsh derby. The clubs are due to meet on 3 November at the Cardiff City Stadium.

Seasoned derby watchers will tell you this is as fierce as any game in British football, only this time the world will be watching. Welsh football is at its apex and Swansea City have played a huge part in that.