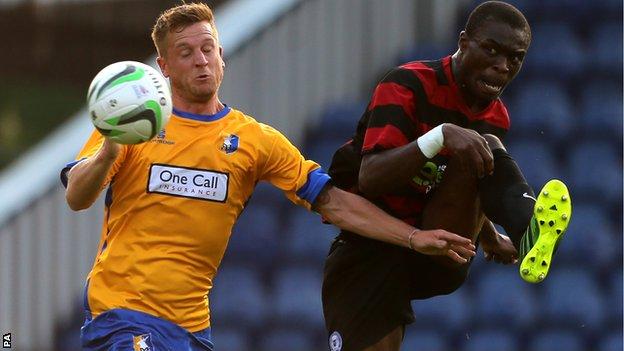 Peterborough defender Gabby Zakuani says despite three of the starting XI being for sale, everyone is committed to achieving promotion from League One.

Posh have won all three matches this season and the trio are ever-present.

"We're all united for the same cause. I don't think any of us are affected by being on the transfer list," he told BBC Radio Cambridgeshire.

A tale of two seasons

This season, they have sandwiched a 5-1 Capital One Cup win at Colchester with victories over Swindon and Notts County in League One.

"The team spirit is brilliant. We all get on well but more importantly we are pushing for the same thing - to win the league."

Zakuani and Rowe are out of contract in June and were made available for transfer this summer having failed to agree new deals.

Barnett has been on the transfer list at London Road for almost a year after a breach of club discipline.

But that uncertainty does not seem to have affected Peterborough's start to the season as they seek an immediate return to the Championship.

"It couldn't have gone better really and we are still getting used to league and getting the rustiness out," Zakuani added.

"We know we have the quality. At the moment we're playing well in patches but once we find that consistency, we'll be devastating.

"We might not be in the Championship, but to take 2,000 fans to Notts County away shows the fans still care and the whole town is pulling together - there is a lot of positivity around the club."